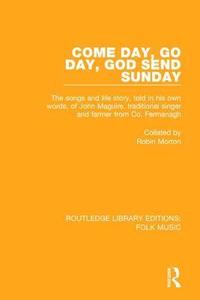 The songs and life story, told in his own words, of John Maguire, traditional singer and farmer from Co. Fermanagh.

av Robin Morton
Häftad Engelska, 2017-09-26
419
Köp
Spara som favorit
Skickas inom 10-15 vardagar.
Gratis frakt inom Sverige över 159 kr för privatpersoner.
Finns även som
Visa alla 3 format & utgåvor
Originally published in 1973. Folk-life and folk-culture, usually the preserve of the scholar, have been brought vividly and entertainingly to life in these recollections and stories of one man's life in the Irish countryside. This book tells the life story of John Maguire, who died in 1975, including over 50 of the songs he sang, with full musical transcriptions. He was a fine singer, firmly within the Irish tradition, and his songs are the record of a people, their history and traditions, their joys and sufferings, their comedies and tragedies. John Maguire's fascinating story, skilfully and unobtrusively collated by Robin Morton, is full of material that will interest singers and students of folksongs. His songs and music will be of value to all those interested in traditional music and song.
Visa hela texten

Reviews of the original publication: 'This book...represents something of a milestone in Anglo-Scots-Irish folksong collections.' American Folklore Society Robin Morton's excellent book....is the best example I have seen to date - which is successfully carrying the singer right back where he belongs, which is in the centre of the picture.' Hamish Henderson, Oral History 'Interesting though the book is for students of folksong, it has still more to offer. It is full of evocative vignettes of Irish country life - ceilidhs, match-making, poteen, hiring fairs, emigration - seen through the eyes of ordinary people,' - Roy Palmer, Teacher 'The script of this fascinating book runs so easily, so freely and so naturally that one instinctively is heating one's hands and one's shins at the turf fire in the kitchen as one listens to rather than reads the soft Fermanagh speech of this captivating character of the countryside.' - Ulster Herald 'It is the best thing yet on Irish songs in English, and it will be the perfect introduction for the American who would like to gain some feeling for Ulster folksong...It will, too, be a direct help to those engaged in the current revival of Irish folk music. The book tells as much of the singer as it does of the song, and the revivalists might become inspired - in a way that most American revivalists weren't - to preserve style and ethic as well as text and melody.' - Henry Glassie, Folklore Forum 'Congratulations to Robin Morton for having the courage to lead the field in Britain.' Dave Arthur, Folk Music Journal 'There is data on how songs are learned, transmitted, and forgotten... It is the perfect introduction for the American who would like to gain some feeling for Ulster folksong.' Henry Glassie, Indiana University

Introduction 1. As the Cocks they Began to Crow 2. Here's a Health to Tommy Kelly 3. If You Want your Praties Sprayed 4. Oh Grass May Grow and Waters Flow 5. On Clyde's Bonny Banks 6. Now, When That We were Married. Appendices 1. A Note on the Musical Transcription and Music for Songs in the Text John Blacking 2. Further Songs with Music 3. Song Notes. Glossary. Index of Songs. Index