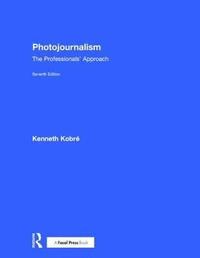 Köp
Spara som favorit
Kan levereras innan julafton!
Finns även som
Visa alla 4 format & utgåvor
Photojournalism: The Professionals' Approach is the definitive book on photojournalism, delivering a blend of insightful interviews with professionals, practical techniques, and high-impact photographs. This edition features updates on social media in photojournalism, shooting video on smart phones, and the use of drones to cover the news. It also includes revised chapters on audio and video, and additional international case studies including, among others, approaches to covering the Arab Spring, the Ukrainian Revolution, and resurgent white supremacy in South Africa. New interviews and case studies bring readers on assignment with industry greats, whose experiences provide a guide on how to take your work from a hobby to a profession. The revised and expanded business chapter goes the next step and outlines how to make a living in photojournalism. Often called the "bible" of the industry, Photojournalism continues to be the must-have reference for photojournalists that it has been for nearly 40 years.
Visa hela texten

"The author crafted this book primarily by talking to and working with professional photojournalists, dedicated news photographers... The author covers a lot of ground, and in great depth, ranging from equipment to various types of photojournalism (sports, features, general news, etc.) to ethics and law. There's a very interesting chapter on the history of photos in journalism. And the final chapter provides great advice about how to move from photography in general to photojournalism, including info on the value of a degree in photojournalism, internships, and freelancing (beginners should read this first)." - Peter Bauer, KelbyOne

Ken Kobre heads the photojournalism program at San Francisco State University. His former students, who include winners of the Pulitzer Prize, World Press Awards, and many other prestigious honors, work on staff and as freelancers for publications and media outlets around the world. Ken maintains an active freelance career that has included assignments for Newsweek, Time, the New York Times, and corporate clients such as Hewlett-Packard, Levi Strauss and Apple. He has worked widely in developing countries including Malaysia, Thailand, India, Bangladesh, Indonesia, Egypt and the Democratic Republic of Congo. Ken is a past winner of the respected Robin F. Garland Educator Award from the National Press Photographers Association (NPPA), and for four years he directed the University of Missouri/NPPA Pictures of the Year Awards.