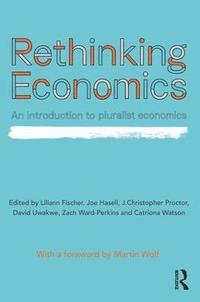 An Introduction to Pluralist Economics

av Liliann Fischer, Joe Hasell, J Christopher Proctor, David Uwakwe, Zach Ward Perkins
Häftad Engelska, 2017-09-26
379
Köp
Spara som favorit
Finns även som
Visa alla 3 format & utgåvor
Economics is a broad and diverse discipline, but most economics textbooks only cover one way of thinking about the economy. This book provides an accessible introduction to nine different approaches to economics: from feminist to ecological and Marxist to behavioural. Each chapter is written by a leading expert in the field described and is intended to stand on its own as well as providing an ambitious survey that seeks to highlight the true diversity of economic thought. Students of economics around the world have begun to demand a more open economics education. This book represents a first step in creating the materials needed to introduce new and diverse ideas into the static world of undergraduate economics. This book will provide context for undergraduate students by placing the mainstream of economic thought side by side with more heterodox schools. This is in keeping with the Rethinking Economics campaign which argues that students are better served when they are presented with a spectrum of economic ideas rather than just the dominant paradigm. Rethinking Economics: An Introduction to Pluralist Economics is a great entry-level economics textbook for lecturers looking to introduce students to the broader range of ideas explored within the economics profession. It is also appropriate and accessible for people outside of academia who are interested in economics and economic theory.
Visa hela texten

'The 2008 financial crisis and its continuing aftermaths have starkly revealed the limitations of the practice of intellectual 'mono-cropping' in economics, that is, the near-total dominance by one approach to economics: Neo-classical economics. Leading the charge against this practice have been young economists from the Rethinking Economics movement. In this book, these young economists, rather than trying to replace one intellectual mono-cropping with another, provide a vision for a pluralist approach to economics. The volume, by presenting nine essays in which leading economists introduce the economic schools they represent, broadens our vision of economics and deepens our understanding of it. It is a highly relevant and enlightening contribution to a debate that will shape the future of the world economy as well as the way in which economics is taught and debated.' - Ha-Joon Chang, University of Cambridge, author of Economics: The User's Guide 'The members of Rethinking Economics haven't just protested against the narrowness of the conventional economics curriculum, they have done something about it. This volume admirably addresses their need for excellent up-to-date expert accounts of a range of different approaches to economics, all with student input.' - Sheila Dow, Emeritus Professor, University of Stirling, UK. 'Economics students have been short-changed by degrees that teach only Neoclassical economics despite its failures before, during and after the crisis. This book provides a useful introduction to alternative voices in economics at a time when, though none of them has all the answers, they are each at least posing questions that the mainstream failed to even consider.' - Professor Steve Keen, Kingston University London, UK. 'This book is much more than a rethink of economics, it's a revolution in the economic landscape, democratizing theory and language for public benefit. This book builds a new corps of citizen economists and helps prevent economists-cum-pundits from pulling esoteric fast ones on the public. It's a must read for anyone wanting to challenge the economic system's dysfunctional status quo and an essential guide for advocates of social, economic and environmental sustainability. For genuine progress to occur, new economic theories, language and tools are needed. This book answers that call.' - Dr. Michael Shank, New York University 'A timely and informative guide to competing schools of thought in economics. An excellent starting point for students looking for a broader economics education.' - Dr Jo Michell, Senior Lecturer in Economics, UWE Bristol, UK. 'Is there life beyond mainstream economics?', you ask. Well, here is your answer: nine approaches, clearly explained by top specialists in each approach. This book produced by members of Rethinking Economics is warmly recommended.' - Victoria Chick, Emeritus Professor of Economics at University College London, UK. 'A very nice, accessible introduction to economics - each chapter is written by a leading expert, from feminist, through ecological to behavioural approaches.' - @Went1955 (Robert Went, Economist, Dutch Scientific Council for Government Policy)