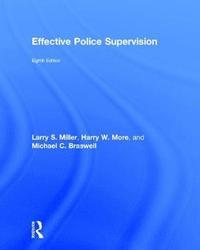 I love this text because it is so robust in its case studies, and allows for students to recognize that they need to be true to themselves when determining a management style if they want to be successful. To many students, the idea of creating a unique management style that is in sync with their personalities is a new idea. This text allows us to explore [that idea] in depth. -Michael Ramon, Washington State University Effective Police Supervision will make excellent outside study material for police promotional examinations. It takes a positive and practical approach, which should be attractive to potential promotional candidates. -Howard Williams, Texas State University

Larry S. Miller is a Professor in the Department of Criminal Justice and Criminology at East Tennessee State University. A former law enforcement officer and crime laboratory director, Miller has authored or co-authored seven textbooks, including Police Photography, Crime Scene Investigation, Report Writing for Criminal Justice Professionals, and Effective Police Supervision. His research interests and journal publications are in the areas of policing and forensic science. Harry W. More was a Professor Emeritus at San Jose State University, and a past president of the Academy of Criminal Justice Sciences and the Western Society of Criminology. He taught at Washington State University; Indiana University of Pennsylvania, where he founded and chaired the Criminology program; and San Jose State University, where he chaired the Department of Administration of Justice. Outside of the university setting, he was employed by the U.S. Secret Service, worked in juvenile probation, and taught in-service management personnel in California, Ohio, and Oregon. At the time of his death, he was the President of the Law Enforcement Consulting Group, and had written numerous articles and authored or edited more than 40 texts. Michael Braswell is Professor Emeritus at East Tennessee State University. He began his career as a prison psychologist and earned his Doctorate in Counseling Psychology from the University of Southern Mississippi in 1975. He joined the Department of Criminal Justice and Criminology at ETSU in 1977, where he taught classes on Ethics and Justice, Human Relations and Criminal Justice, and Film Studies in Crime and Justice. He is widely published, and his textbook Justice, Crime, and Ethics is particularly influential in the field of criminal justice.