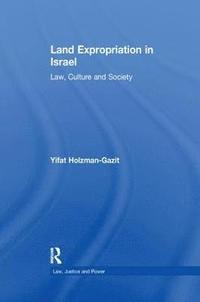 av Yifat Holzman-Gazit
Häftad Engelska, 2017-03-06
619
Köp
Spara som favorit
Skickas inom 10-15 vardagar.
Fri frakt inom Sverige för privatpersoner.
Finns även som
Visa alla 4 format & utgåvor
Historically, Israel's Supreme Court has failed to limit the state's powers of expropriation and to protect private property. This book argues that the Court's land expropriation jurisprudence can only be understood against the political, cultural and institutional context in which it was shaped. Security and economic pressures, the precarious status of the Court in the early years, the pervading ethos of collectivism, the cultural symbolism of public land ownership and the perceived strategic and demographic risks posed by the Israeli Arab population - all contributed to the creation of a harsh and arguably undemocratic land expropriation legal philosophy. This philosophy, the book argues, was applied by the Supreme Court to Arabs and Jews alike from the creation of the state in 1948 and until the 1980s. The book concludes with an analysis of the constitutional change of 1992 and its impact on the legal treatment of property rights under Israeli law.
Visa hela texten

'Academically , Land Expropriation in Israel is important for two reasons. The first is its conclusion, drawn from previously overlooked quarters, that "the Jewish-Arab land struggle shaped the court's approach to property rights, not only in areas of high political and national tension such as Jerusalem and the Galilee, but created the pattern for expropriation adjudication throughout the country". The second is its conclusion "that the supreme court's considerable self-restraint...had not only its intended effect on land ownership in the Arab sector, but also an unintended parallel effect on the legal treatment of private land ownership and land expropriation in the Jewish sector". Scholarship has hitherto not addressed this dynamic, and this finding contributes to a more complete and nuanced understanding of the history of Israeli land-taking law.' Journal of Palestine Studies 'A very useful analysis of the history and sociology of Israeli land law. Crucial for students of state and nation building, of ideology and utopia and of the intersection between the Jewish and the Palestinian refugee problems in post 1948 Israel.' Pnina Lahav, Boston University School of Law, USA 'This is a deeply researched and carefully written case-study of law, politics, and land policy in Israel, especially land expropriation policy. Dr. Holzman-Gazit's book is important not only for those who are interested in the history of Israel, and those more generally concerned with unraveling the tangled skein of middle-eastern politics; it is also a dispassionate, insightful and illuminating exploration of the relationship between legal and political institutions, and the power and non-power of courts to affect policy in the modern world. Lawrence M. Friedman, Stanford Law School, USA. 'This is a first-rate study which places Israel's land expropriation laws in their political, social and cultural contexts. Holzman-Gazit provides a rich, lucid and non-partisan interpretation of the rela