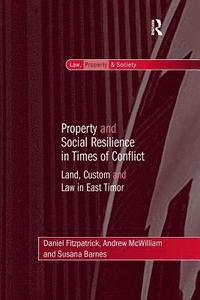 Property and Social Resilience in Times of Conflict

av Daniel Fitzpatrick, Andrew McWilliam, Susana Barnes
Häftad Engelska, 2016-11-11
679
Köp
Spara som favorit
Finns även som
Visa alla 4 format & utgåvor
Peace-building in a number of contemporary contexts involves fragile states, influential customary systems and histories of land conflict arising from mass population displacement. This book is a timely response to the increased international focus on peace-building problems arising from population displacement and post-conflict state fragility. It considers the relationship between property and resilient customary systems in conflict-affected East Timor. The chapters include micro-studies of customary land and population displacement during the periods of Portuguese colonization and Indonesian military occupation. There is also analysis of the development of laws relating to customary land in independent East Timor (Timor Leste). The book fills a gap in socio-legal literature on property, custom and peace-building and is of interest to property scholars, anthropologists, and academics and practitioners in the emerging field of peace and conflict studies.
Visa hela texten

'Land policy is normally difficult and bitterly contested after civil wars. These authors combine a deep knowledge of both comparative land law and Timorese ethnography. The result is nuanced, thoughtful lessons of the dilemmas of property settlements using diverse districts of East Timor as case studies. A major contribution on the contest and accommodation between resilient custom and resurgent state law after war.' John Braithwaite, Australian National University, Australia 'East Timor provides an unusual opportunity to observe the development of new land legislation in a recently-established nation-state. With its interdisciplinary approach and rich case study material, this volume provides a considered examination of the role of violence and social order in property analysis.' Sara Pantuliano, Overseas Development Institute, UK 'The book provides a rich in-depth assessment of the advantages and disadvantages of the customary property systems in situations of conflict. It adds value to the literature on known resilient customary systems in postcolonial contexts by providing an analysis and explanation for resilience in circumstances of war and displacement.' International Journal on World Peace Volume

Daniel Fitzpatrick is a Reader in Law at the Australian National University, and a member of the Global Faculty at New York University School of Law. He has written widely on property theory in a law and development context, with a particular focus on natural disasters and armed conflicts. He was the UN's land rights adviser in post-conflict East Timor (2000) and post-tsunami Indonesia (2005-6). In 2007 he won the Hart Article Prize from the UK Socio-Legal Studies Association. He has published in the Yale Law Journal, the Law and Society Review, and the Yale Journal of International Law. Dr Fitzpatrick is the primary author of the UN's guidelines on addressing land issues after natural disasters. He has been a Visiting Professor at the University of Muenster (2002), a Visiting Professor at the National University of Singapore (2006-09), and a Distinguished Visitor at the University of Toronto (2007). Andrew McWilliam is a Senior Research Fellow in Anthropology at the Australian National University. He has published widely on the ethnography of Timor-Leste and eastern Indonesia including the forthcoming edited volume (with Elizabeth G.Traube) entitled, Land and Life in Timor-Leste: ethnographic essays (2011) ANU E-Press. His current research interests focus on customary land tenures and resource development, including broader issues of governance in post-conflict Timor-Leste and decentralised Indonesia. He has had visiting academic appointments and affiliations at the International Institute for Asian Studies, University of Leiden (1998 & 2005), the Kahin Centre for Southeast Asian Studies, Cornell University (2007) and Yale University (2010). Susana Barnes is currently enrolled as a PhD candidate in Anthropology at Monash University. Previously, she worked as Advisor to the Statement Taking and Data Processing Unit of the Commission for Truth, Reception and Reconciliation (May 2003 to December 2004) and as a Project Manager for the Jesuit Refugee Service (January 2000 to January 2002). As part of the Australian National University inter-disciplinary anthropological-legal study on customary land tenure systems in Timor Leste she undertook 14 months field work in the rural communities of Ainaro, Babulo and Maliana. Her research interests are East Timor ethnography, customary land and resource tenures, ritual and religion, social transformation and state and society.