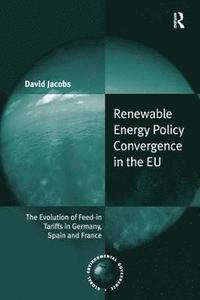 The Evolution of Feed-in Tariffs in Germany, Spain and France

av David Jacobs
Häftad Engelska, 2017-02-27
619
Köp
Spara som favorit
Finns även som
Visa alla 4 format & utgåvor
This book examines the coordination of renewable energy policies in the European Union using an innovative theoretical approach to explain national policy making. David Jacobs asks, why are national support instruments for electricity from renewable energy sources converging, even though the harmonisation of these frameworks at the European level has failed? Which causal mechanisms lead to cross-national policy similarities? And what are the implications for policy coordination in the EU? The author traces the evolution of feed-in tariffs - the most successful and most widely used support mechanism for renewable electricity - in Germany, Spain and France. He reveals increasing cross-national policy similarities in feed-in tariff design - despite the failure of harmonizing instruments at the European level. He explains these increasing policy similarities by applying policy convergence theory. Policy convergence can occur voluntarily, based on transnational communication, regulatory competition and technological innovations and these findings have important implications for European policy steering. The key to this book is the interrelation of an innovative theoretical concept (coordination of policies in the international arena via voluntary cooperation) with a very topical empirical research focus - the promotion of renewable energies in the EU. It will be essential reading for scholars and students of environmental policy, comparative politics and European studies.
Visa hela texten

'This is a theoretically well-grounded and empirically rich study of a highly important topic. It offers fascinating insights on the evolution of an innovative policy instrument cutting across environmental and energy policy. A recommendable book not only for those interested in these policy fields, but also for readers with a general interest in theories of policy change.' Christoph Knill, UnversitAt Konstanz, Germany 'The EU is actively searching for new ways to govern that do not make "Brussels" any bigger. David Jacobs' subtle empirical analysis of feed in tariff policies in three countries, ably demonstrates how it can trigger cross-national policy convergence using softer modes of governance. He manages to shed much new light on the EU's ability to govern in policy areas where its involvement is politically contested.' Andrew Jordan, University of East Anglia, UK 'Jacobs' volume will not merely be of interest to scholars of comparative and European politics, as well as practitioners of renewable energy policy, but compulsory reading. ... this is a well-crafted analysis that covers its themes in great detail. The excellent introductory and framework chapters feature unparalleled overviews of the current theoretical and empirical literature on the subject, and the case study chapter on solar photovoltaics is superb. The volume would also be of interest to any comparativist as its small-n analysis of convergence is expertly constructed. As Jacobs notes (p. 201), domestic factors alone cannot be expected to explain policy development in an increasingly globalised world, such that 'analysing countries as interdependent rather than independent actors will be of increasing importance for political scientists' in future. Understanding the nature of this interaction and convergence is increasingly salient in modern international politics, and Jacobs has written what will be seen as a landmark text for many years to come.' Political Studies Review