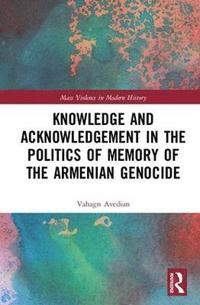 Köp
Spara som favorit
Kan levereras innan julafton!
Finns även som
Visa alla 3 format & utgåvor
Is the Armenian Genocide a strictly historical matter? If that is the case, why is it still a topical issue, capable of causing diplomatic rows and heated debates? The short answer would be that the century old Armenian Genocide is much more than a historical question. It emerged as a political dilemma on the international arena at the San Stefano peace conference in 1878 and has remained as such into our days. The disparity between knowledge and acknowledgement, mainly ascribable to Turkey's official denial of the genocide, has only heightened the politicization of the Armenian question. Thus, the memories of the WWI era refuse to be relegated to the pages of history but are rather perceived as a vivid presence. This is the result of the perpetual process of politics of memory. The politics of memory is an intricate and interdisciplinary negotiation, engaging many different actors in the society who have access to a wide range of resources and measures in order to achieve their goals. By following the Armenian question during the past century up to its Centennial Commemoration in 2015, this study aims to explain why and how the politics of memory of the Armenian Genocide has kept it as a topical issue in our days.
Visa hela texten

Vahagn Avedian is the editor of Armenica.org and Genocide1915.org. The current publication is a modified version of his Ph.D. thesis at the History Department, Lund University.

Contents;Acknowledgements;Introduction ;The Vitality of the Armenian Genocide: Why is it Still Topical? ;Genocide Studies: A True Interdisciplinary Field and its Challenges;Politics of Memory: An Intricate Perpetual Process;Politics of Memory Explained through its Constituent Parts;Memory and History in the Politics of Memory;Creating National Narrative and Identity;Molding the Memory by Forgetting;The Reciprocal Relation between Democracy and Memory;Education: An Example of Auxiliary Means in Politics of Memory;The Central Role of Law and Justice;Reconciliation: Synthesis of Recognition, Responsibility and Reparation ;Existing Research;Outline and Delimitations;The Armenian Question between History and Politics ;The Entry of the Armenian Question into the International Arena;Beacons of Hope and Justice: The Sevres Treaty;From Sevres to Lausanne: Realpolitik Reigns Supreme;Genocide in International Law: Nuremberg and the UN Convention ;The Turkish Genocide Denial during the Interwar Period;The Reawakening: The 50th Commemoration Day on April 24, 1965 ;The Resonance: The Diaspora as Agent of Remembrance and Recognition ;The Rediscovery of the Suppressed Genocide ;The Igniting Spark: The Genocide Survivor Gourgen Yanikian;The First UN Genocide Study: The Ruhashyankiko Report, 1979;The Iron Ladle: Armed Terrorism as Political Leverage;The Entry into the Academia;Which Memory to Preserve: The US Holocaust Memorial Museum;Hearing the Neglected Victim: The Permanent Peoples' Tribunal, 1984;The UN Genocide Convention Revisited: The Whitaker Report, 1985 ;The Pinnacle of the Recognition Process: European Parliament, 1987 ;Memory, History and Justice: Towards Reconciliation ;The Karabakh Conflict: The Legacy Turned Catalyst for Independence ;Independence and the Genocide as Rule Setter;Armenian-Turkish Relations and the Old Ghost of Genocide;Parliamentary Recognitions: Writing History or Confirming the Research? ;Legal Examination: Law and Politics;The Unforgotten Genocide: The Centennial Commemoration, 2015;Knowledge and (Dis)Acknowledgement: A Century of the Politics of Memory of the Armenian Genocide ; Bibliography ;Index