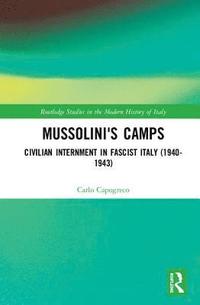 av Carlo Spartaco Capogreco
Inbunden Engelska, 2019-11-27
1449
Köp
Spara som favorit
Skickas inom 7-10 vardagar.
Fri frakt inom Sverige för privatpersoner.
Finns även som
Visa alla 2 format & utgåvor
This book-which is based on vast archival research and on a variety of primary sources-has filled a gap in Italy's historiography on Fascism, and in European and world history about concentration camps in our contemporary world. It provides, for the first time, a survey of the different types of internment practiced by Fascist Italy during the war and a historical map of its concentration camps. Published in Italian (I campi del duce, Turin: Einaudi, 2004), in Croatian (Mussolinijevi Logori, Zagreb: Golden Marketing - Tehnicka knjiga, 2007), in Slovenian (Fasisticna taborisca, Ljublana: Publicisticno drustvo ZAK, 2011), and now in English, Mussolini's Camps is both an excellent product of academic research and a narrative easily accessible to readers who are not professional historians. It undermines the myth that concentration camps were established in Italy only after the creation of the Republic of Salo and the Nazi occupation of Italy's northern regions in 1943, and questions the persistent and traditional image of Italians as brava gente (good people), showing how Fascism made extensive use of the camps (even in the occupied territories) as an instrument of coercion and political control.
Visa hela texten

"A book that presents irrefutable documentary evidence and is of key importance for any assessment and historical judgment of Italian Fascism and its nature." Simon Levis Sullam, University of Venice, Italy "Mussolini's Camps is first and foremost a historical essay, yet laudably written so as to reach a wider audience ... At the same time, it is a tale of research, discovery and denunciation." Michele Sarfatti, Foundation Jewish Contemporary Documentation Center, Milan, Italy "Capogreco painstakingly reconstructs the map of Italy's concentration camp system, thus turning the existence of such a system, the rules governing it, the discriminatory logic buttressing it into an inescapable issue." David Bidussa, Giangiacomo Feltrinelli Foundation, Milan, Italy "Mussolini's Camps is crucial for a full understanding of Fascism." Bruno Bongiovanni, University of Turin, Italy "The author's merit rests especially on his having brought to light a topic almost entirely absent from Italy's public awareness and which has mostly been neglected by historical research as well." Ruth Nattermann, Bundeswehr University Munich, Germany "Capogreco has provided the clearest, most precise and most effective overview to date of Fascist civilian internment ... His work sets a good example on how to write objectively about delicate and tragic chapters in human history." Petar Strcic, Society for Croatian History and University of Zagreb, Croatia "We will find in Capogreco the kind of sound, comprehensive overview of Fascist civilian internment that was missing until now." Damijan Gustin, Institute of Contemporary History, Ljubljana, Slovenia "After Mussolini's Camps, our understanding and our mental map of the Fascist regime's policy and practice of internment - of its very existence as a system, as well as its vast scope and multiple functioning - was transformed." Robert S.C. Gordon, University of Cambridge, UK

Carlo Spartaco Capogreco is considered one of the foremost international experts on the history of Civilian Internment during Fascism. Currently, he is Professor of Contemporary History at the University of Calabria and Scientific Advisor for the Foundation Jewish Contemporary Documentation Center in Milan. Among his other writings of note are Il piombo e l'argento (Rome: Donzelli, 2007); Renicci (Milan: Mursia, 2003); Ferramonti (Florence: La Giuntina, 1987). He has contributed entries and essays to the Encyclopedia of Camps and Ghettos (Bloomington, IN: Indiana University Press, 2018); La Shoah in Italia (Turin: Utet, 2010); Dizionario dell'Olocausto (Turin: Einaudi, 2004); Dizionario del Fascismo (Turin: Einaudi, 2002); Dizionario della Resistenza (Torino: Einaudi, 2001); and has also edited and annotated the critical edition of Maria Eisenstein's L'internata numero 6 (Milan: Mimesis, 2014).

List of figures; Preface; List of abbreviations; Note on the text; Introduction; 1. Preliminary survey; 2. The bureaucratic machine; 3. The internees; 4. Life in the camps and care of the internees; 5. Topography and history of the camps (1940-1943); 6. Chronology of the main administrative and legislative acts and orders (November 1926-November 1943); Bibliographic references; Index