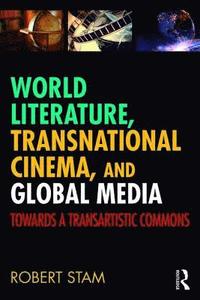 av Robert Stam
Häftad Engelska, 2019-02-22
449
Köp
Spara som favorit
Finns även som
Visa alla 3 format & utgåvor
With extraordinary transnational and transdisciplinary range, World Literature, Transnational Cinema, and Global Media comprehensively explores the genealogies, vocabularies, and concepts orienting the fields within literature, cinema, and media studies. Orchestrating a layered conversation between arts, disciplines, and media, Stam argues for their "mutual embeddedness" and their shared "in-between" territories. Rather than merely adding to the existing scholarship, the book builds a relational framework through the connectivities within literature, cinema, music, and media that opens up analysis to new categories and concepts, while crossing spatial, temporal, theoretical, disciplinary, and mediatic borders. The book also questions an array of hierarchies: literature over cinema; source novel over adaptation; feature film over documentary; erudite over vernacular culture; Western modernisms over "peripheral" modernisms; classical over popular music; written poetry over sung poetry, and so forth. The book is structured around the concept of the "commons," forming a strong thread which links various struggles against "enclosures" of all kinds, with emphasis on natural, indigenous, cultural, creative, digital, and the transdisciplinary commons. World Literature, Transnational Cinema, and Global Media is ideal to further the theoretical discussion for those undergraduate and graduate departments in cinema studies, media studies, arts and art history, communications, journalism, and new digital media programs at all levels.
Visa hela texten

"Robert Stam takes on the world-world literature, world cinema, world digital media, even world music-in this heaven-storming encyclopedia that shows what happens to all sorts of entertainment when it crosses national and cultural borders and gets reconceptualized, rebranded, marginalized, reviled, hailed, or all of the above. Although his canvas is vast, Stam is less a synthesizer intent on providing a single authoritative map revealing the relations among world literature, postcolonial literature, and transnational cinema than an effervescent and monumentally well-informed tour guide who wants to raise our consciousness, or a big-top carnival barker who invites us to celebrate carnival culture." Thomas Leitch, University of Delaware "World Literature, Transnational Cinema, and Global Media stages a much needed, layered, and illuminating dialogue between the related fields of literature, cinema, and media studies. All marked by a 'transnational turn', these fields share various methodologies and concerns, yet rarely talk to and learn from each other. In a beautifully orchestrated polylogue that engages fresh voices and perspectives, Stam not only addresses but actually moves across various kinds of borders-spatial, temporal, discursive, disciplinary, mediatic, textual-with incredible deftness, scope, and insight. In this invaluable book, border-crossing or 'trans' in all its permutations is not just a buzz word but an epistemological prerogative, a necessary way of thinking and understanding." Meta Mazaj, Univesity of Pennsylvania "Robert Stam's pivotal position in film and literary studies is once again confirmed with this book, a sweeping account of how literature, film and all other arts converse beyond national and medial borders. Stam, like no-one else, can make sense of the jargon of 'trans', 'inter' and 'global' that litters contemporary academic vocabulary. Away from easy sloganeering and drawing on his truly encyclopaedic erudition in art history and theory, he weaves these terms into a 'network of activism', as he calls it, in order to effectively combat ideas of 'primacies' and 'centres' so dear to the colonial project. Stam's luminous scholarship is ferociously political, but equally compelling for its openness to the beauty of the arts, languages and cultures of the entire world." Lucia Nagib, University of Reading "In the 21st century most cultural fields such as cinema, literature, and music have abandoned their national identities for a global practice in which different traditions and forms pass through new crucibles of creativity. Yet while their critical reception has acknowledged the irruption of the global within them, Robert Stam is the first to demonstrate that global also means the crossing of different fields with each other. This brilliant study of transcreativity across contemporary cultures offers the first analysis of the transformative power of globalization across the media." Robert J. C. Young, New York University "Written with encyclopedic erudition, the book can simultaneously be read as a sophisticated reader or "keyword" reference book providing guidance to navigate an increasingly complex body of academic literature [... ] and a much more ambitious essay calling for experimental teaching and research methodologies [...] Stam's line of arguments transgresses well-established national, disciplinary and historical borders-a gesture that often implies a critical revision of the traditional toolbox of (Western) film scholars." SYNOPTIQUE Review, Pablo La Parra-Perez

Robert Stam is University Professor at New York University. His books include Francois Truffaut and Friends; Literature through Film; Film Theory: An Introduction; and (with Ella Shohat) Unthinking Eurocentrism and Race in Translation. With work translated into sixteen languages, he has taught in France, Brazil, Tunisia, Germany, and the UAE.

Introduction: The Terms of Debate Goethe and Weltliteratur The Theory of World Literature From World Literature to Alternative Modernisms The Cosmopolitanism of the Periphery Columbus, El Nuevo Mundo, and Postcolonial Studies French Postcoloniality and Litterature-Monde Sibling Disciplines: Literary Studies and Cinema Studies From Literature to Film: A Study in Ambivalence The Cinema and the World Literature Canon The Gains of (Film) Translation Adaptation, Remix, and the Cultural Commons From Adaptation to Remix World Cinema: The Pre-Hisory The Theory of World Cinema World Music and the Commons Transmedial Music in Latin America The Transnational Turn Transnational Cinema The Coefficient of Transnationality Transnational Reception, Gender, and Aesthetics Transnational Film Schools and Pedagogy The Rise of the "Woods": From Hollywood to Nollywood via Bollywood Globalization, Political Economy, and the Media Acquatic Tropologies Technologies of Intermedial Flow Globalization: The Mediatic Resistance Transoceanic Currents: the Red, Black, and White Atlantic Global Indigeneity and the Transnational Gaze The Media's "Deep Time" and the Planetary Commons The Commons and the Globalized Citizen Terminological Reflections Toward a "Trans" Methodology