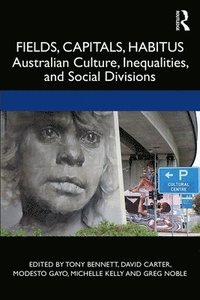 av Tony Bennett, David Carter, Modesto Gayo, Michelle Kelly, Greg Noble
Häftad Engelska, 2020-07-22
409
Köp
Spara som favorit
Skickas inom 10-15 vardagar.
Fri frakt inom Sverige för privatpersoner.
Finns även som
Visa alla 3 format & utgåvor
Fields, Capitals, Habitus provides an insightful analysis of the relations between culture and society in contemporary Australia. Presenting the findings of a detailed national survey of Australian cultural tastes and practices, it demonstrates the pivotal significance of the role culture plays at the intersections of a range of social divisions and inequalities: between classes, age cohorts, ethnicities, genders, city and country, and the relations between Indigenous and non-Indigenous Australians. The book looks first at how social divisions inform the ways in which Australians from different social backgrounds and positions engage with the genres, institutions and particular works of culture and cultural figures across six cultural fields: the visual arts, literature, music, heritage, television and sport. It then examines how Australians' cultural preferences across these fields interact within the Australian 'space of lifestyles'. The close attention paid to class here includes an engagement with role of 'middlebrow' cultures in Australia and the role played by new forms of Indigenous cultural capital in the emergence of an Indigenous middle class. The rich survey data is complemented throughout by in-depth qualitative data provided by interviews with survey participants. These are discussed more closely in the final part of the book which explores the gendered, political, personal and community associations of cultural tastes across Australia's Anglo-Celtic, Italian, Lebanese, Chinese and Indian populations. The distinctive ethical issues associated with how Australians relate to Indigenous culture are also examined. In the light it throws on the formations of cultural capital in a multicultural settler colonial society, Fields, Capitals, Habitus makes a landmark contribution to cultural capital research.
Visa hela texten

"Fields, Capitals, Habitus does not just duplicate some forty years later Bourdieu's Distinction model on the Australian case. By making this analytical framework travel through time and from one society to another, it puts it to the test, demonstrates its fecundity, and also complements it by integrating new issues (on the relations between ethnicity, Indigeneity and culture in particular). In addition to the formidable empirical knowledge of the social and cultural structures of contemporary Australia that it provides, this intellectual journey makes an essential contribution to the analysis of the role of culture in social life." Vincent Dubois, Professor of Sociology, University of Strasbourg, France "Fields, Capitals, Habitus is the definitive study of how and why Australians make choices about their tastes and practices across a range of cultural areas. Its breadth of reference and its methodological sophistication - especially its fine-grained sensitivity to the specific shape of different cultural fields - make it the outstanding sociological account of Australian culture, and it has important and interesting things to say about the relation between symbolic practices and social power. It is notable for the weight it gives to studying ethnicity and Australian Indigenous culture, something that has never been done with this degree of evidence in previous studies." John Frow, Professor of English, University of Sydney, Australia "The authors of this book are veterans of cultural analysis. Their aim is to be true to the complexity of their data. Because of this, the book is a lot more than an application of Bourdieu's categories to a number of Australian cultural fields. What the reader will experience is a creative dialogue whereby our understanding of Australian culture and of the analytical capacity of Bourdieu's concepts are both enlarged." Ghassan Hage, Professor of Anthropology and Social Theory, University of Melbourne, Australia "Tony Bennett and his colleagues have written an exemplary and rigorous study of the Australian cultural field, showing the significance of entrenched cultural divides, and also the powerful role of class. With its sensitive deployment of Bourdieu's field analysis, this will be one of the most sophisticated studies of cultural inequality anywhere in the world and will command widespread interest." Mike Savage, Professor of Sociology and Director of the Social Inequalities Institute, London School of Economics and Political Science, UK "Fields, Capitals, Habitus demonstrates the continuing pertinence of Bourdieu's core concepts-even perhaps their indispensability-for the analysis of contemporary cultural tastes in Australia. But it also pushes that analysis past the limitations of Bourdieu's model in certain key respects, especially with regard to the increasingly transnational forms of production and consumption and the specific importance of ethnicity and indigeneity, to which the authors pay careful and sustained attention. What emerges is at once the most comprehensive and the most nuanced perspective available on the social space of Australian cultural preferences and practices." James English, John Welsh Centennial Professor of English, University of Pennsylvania, US