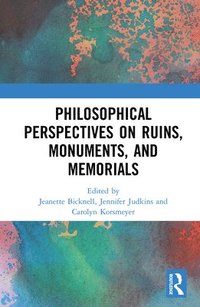 av Jeanette Bicknell, Jennifer Judkins, Carolyn Korsmeyer
Inbunden Engelska, 2019-07-30
1509
Köp
Spara som favorit
Skickas inom 7-10 vardagar.
Gratis frakt inom Sverige över 159 kr för privatpersoner.
Finns även som
Visa alla 2 format & utgåvor
This collection of newly published essays examines our relationship to physical objects that invoke, commemorate, and honor the past. The recent destruction of cultural heritage in war and controversies over Civil War monuments in the US have foregrounded the importance of artifacts that embody history. The book invites us to ask: How do memorials convey their meanings? What is our responsibility for the preservation or reconstruction of historically significant structures? How should we respond when the public display of a monument divides a community? This anthology includes coverage of the destruction of Palmyra and the Bamiyan Buddhas, the loss of cultural heritage through war and natural disasters, the explosive controversies surrounding Confederate-era monuments, and the decay of industry in the U.S. Rust Belt. The authors consider issues of preservation and reconstruction, the nature of ruins, the aesthetic and ethical values of memorials, and the relationship of cultural memory to material artifacts that remain from the past. Written by a leading group of philosophers, art historians, and archeologists, the 23 chapters cover monuments and memorials from Dubai to Detroit, from the instant destruction of Hiroshima to the gradual sinking of Venice.
Visa hela texten

"This lavishly illustrated, fascinating collection brings together original essays by philosophers, archaeologists, architects, cultural scholars, and art historians. All aspects and functions of ruins, monuments, and memorials are covered, including the ethical dilemmas they can pose, the loss of cultural heritage they often represent, the issues surrounding their restoration and preservation, and their aesthetic value. In these times, when memorials valorize people and events that are now regarded with moral suspicion and war and conflict see the widespread destruction of remnants of ancient civilizations, this book could not be more topical." - Stephen Davies, former President of the American Society for Aesthetics and Distinguished Professor, University of Auckland, New Zealand "This stunning collection of 23 new essays by philosophers, art historians, architects, and archaeologists is called Philosophical Perspectives on Ruins, Monuments, and Memorials. But this rather academic sounding title gives little indication of the fascinating and exciting contents of the volume. The titles of some of its essays give a better idea, for example, "Churches as Memory Machines," "Rust Belt Ruins," "From Haunted Ruin to Touristified City: An Aesthetic History of Venice," "The Reconstruction of Damaged or Destroyed Heritage," "Reflections on the Atomic Bomb Ruin in Hiroshima," and "The Ruins of War". These are not simply academic studies; they are meditations on the interaction of human experiences and values-aesthetic, moral, religious, cultural, historical-as embodied in ruins, monuments, and memorials. Moreover, the 45 illustrations are alone worth the price of the volume." - Allen Carlson, Professor Emeritus of Philosophy, University of Alberta, Canada

Jeanette Bicknell is an independent scholar based in Toronto, Canada. She is the author of Philosophy of Song and Singing: An Introduction (2015) and Why Music Moves Us (2009). Jennifer Judkins is a retired Adjunct Professor of Music at UCLA and has twice served as a Trustee for the American Society for Aesthetics. Recently, she authored two articles in then Routledge Companion to Philosophy and Music (2011), and was a guest editor and contributor to the "Symposium on Ruin and Absence" in the Journal of Aesthetics and Art Criticism (2014). Carolyn Korsmeyer is Research Professor of Philosophy at the University at Buffalo. Her recent books include Things: In Touch with the Past (2019) and Savoring Disgust: The Foul and the Fair in Aesthetics (2011). She is a past president of the American Society for Aesthetics.

Editors' Introduction: History, Ethics, Aesthetics: When Values Converge Part I: Honoring and Mourning 1. Life and Death in Rock: A Meditation on Stone Memorials Kathleen Higgins 2. How Memorials Speak to Us Geoffrey Scarre 3. How Memorials Mean, or How To Do Things with Stones James O. Young 4. The Proper Object of Emotion: Memorial Art, Grief, Remembrance Deborah Knight 5. Churches as Memory Machines Noel Carroll 6. More than Bare Bones: The Artistry and Ethics of Ossuaries Susan L. Feagin and Carolyn Korsmeyer Part II: Ruins Past and Present 7. The Values of Ruins and Depictions of Ruins Peter Lamarque 8. On the Road to Ruin: Anticipating and Appreciating the Natural Degradation of Human Constructions Ronald Moore 9. Ruins and Sham Ruins as Architectural Objects Saul Fisher 10. Rust Belt Ruins Renee Conroy 11. Neo-Picturesque Dominic McIver Lopes and Susan Herrington 12. Layers in London: How Buildings Remember Jennifer Judkins 13. From Haunted Ruin to Touristified City: An Aesthetic History of Venice Max Ryynanen 14. The (Future of the) Ruins in the United Arab Emirates Zoltan Somhegyi 15. Environmental Heritage and the Ruins of the Future. Erich Hatala Matthes Part III: Conflict, Destruction, and the Aftermath 16. The Reconstruction of Damaged or Destroyed Heritage Derek Matravers 17. Reflections on the Atomic Bomb Ruin in Hiroshima Yuriko Saito 18. Bamiyan's Echo: Sounding Out the Emptiness James Janowski 19. The Ruins of War Elizabeth Scarbrough 20. Respect, Responsibility, and Ruins Jeremy Page and Elisabeth Schellekens 21. The Physical Legacy of a Troubled Past Jeanette Bicknell 22. For the Union Dead: Memorial Hall at Harvard University, and the Exclusion of the Confederate Fallen Ivan Gaskell 23. Ruins and Debris: Cultural Heritage Practice, Resource Management, and Archaeology Robin Coningham and Kai Weise