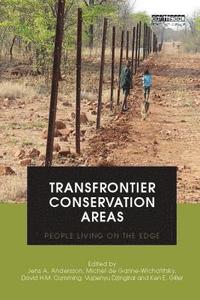 People Living on the Edge

av Jens A Andersson, David H M Cumming, Vupenyu Dzingirai, Ken E Giller
Häftad Engelska, 2017-06-30
559
Köp
Spara som favorit
Skickas inom 10-15 vardagar.
Fri frakt inom Sverige för privatpersoner.
Finns även som
Visa alla 3 format & utgåvor
The introduction of transfrontier conservation areas (TFCAs) in southern Africa was based on an enchanting promise: simultaneously contributing to global biodiversity conservation initiatives, regional peace and integration, and the sustainable socio-economic development of rural communities. Cross-border collaboration and eco-tourism became seen as the vehicles of this promise, which would enhance regional peace and stability along the way. However, as these highly political projects take shape, conservation and development policymaking progressively shifts from the national to regional and global arenas, and the peoples most affected by TFCA formation tend to disappear from view. This book focuses on the forgotten people displaced by, or living on the edge of, protected wildlife areas. It moves beyond the grand 'enchanting promise' of conservation and development across frontiers, and unfounded notions of TFCAs as integrated social-ecological systems. Peoples' dependency on natural resources - the specific combination of crop cultivation, livestock keeping and natural resource harvesting activities - varies enormously along the conservation frontier, as does their reliance on resources on the other side of the conservation boundary. Hence, the studies in this book move from the dream of eco-tourism-fuelled development supporting nature conservation and people towards the local realities facing marginalized people, living adjacent to protected areas in environments often poorly suited to agriculture.
Visa hela texten

"Surely this book must be considered essential reading for all academics, practitioners and policy makers who are working in transboundary areas in the region, and particularly within developing countries of the world. It is to be hoped that it will influence changes in the way that practitioners work on TFCAs, and refocus their efforts to devise policy and initiatives that drive more rapid and sustainable improvements to the livelihoods of people who live there, while also promoting biodiversity conservation in expansive conservation areas." - Dr Anna Spenceley, IUCN "The main strength of Transfrontier Conservation Areas lies in its detailed and thorough analysis of the complexities facing TFCA planners in edge environments, which to date have received relatively little research attention." - Biological Conservation, James Bennett, Coventry University "A search on Amazon.com will present you with five recent books on Transfrontier Conservation. This volume, however, deserves to be particularly recommended as a significant analysis of development policy. It confronts the ideology of Transfrontier Conservation in Southern Africa systematically with the actual realities on the ground and finds that these do not fit. In that respect, it is reminiscent of Ferguson's Anti Politics Machine." - Jan Kees van Donge, University of Papua New Guinea , European Journal of Development Research

Editors Jens A. Andersson is a rural development sociologist who has worked on smallholder farming and migration in Southern Africa. He coordinates the 'Competing Claims on Natural Resources' programme, a collaboration between Wageningen University and several universities in Southern Africa. Michel de Garine-Wichatitsky is an ecologist and a veterinarian who has worked on livestock-wildlife interactions in Southern Africa. He coordinates the collaborative research platform 'Production and Conservation in Partnership'. David H.M. Cumming is an ecologist who has been working in conservation in Southern Africa since the early 1960s. He is presently an Honorary Professor at the University of Cape Town, a Research Associate at the University of Zimbabwe, a freelance consultant, and advisor to the AHEAD-GLTFCA initiative. Vupenyu Dzingirai is a social anthropologist based at the Centre for Applied Social Sciences at the University of Zimbabwe. He has worked intensively in the Zambezi Valley among indigenous communities threatened by development activities. Ken E. Giller is an agro-ecologist who works principally on sustainable intensification of smallholder farming systems in sub-Saharan Africa. He is leader of the 'Competing Claims on Natural Resources' programme. Contributors Frederic Baudron, Alexandre Caron, Petronella Chaminuka, Chaka Chirozva, Herve Fritz, Chloe Guerbois, Eleonore Hellard, Ferran Jori, Billy Mukamuri, Collen Matema, Steven Matema, Jessica Milgroom, Marshall W. Murphree, Chrispen Murungweni, Amon Murwira, Tendai Nzuma, Davies M. Pfukenyi, Xavier Poshiwa, Wayne Twine and Fadzai Zengeya.