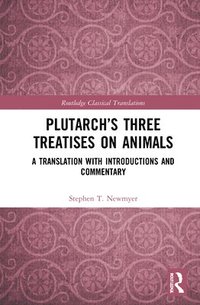 A Translation with Introductions and Commentary

av Stephen T Newmyer
Inbunden Engelska, 2020-12-31
1929
Köp
Spara som favorit
Finns även som
Visa alla 2 format & utgåvor
This volume offers a new translation of Plutarch's three treatises on animals-On the Cleverness of Animals, Whether Beasts Are Rational, and On Eating Meat-accompanied by introductions and explanatory commentaries. The accompanying commentaries are designed not only to elucidate the meaning of the Greek text, but to call attention to Plutarch's striking anticipations of arguments central to current philosophical and ethological discourse in defense of the position that non-human animals have intellectual and emotional dimensions that make them worthy of inclusion in the moral universe of human beings. Plutarch's Three Treatises on Animals will be of interest to students of ancient philosophy and natural science, and to all readers who wish to explore the history of thought on human-non-human animal relations, in which the animal treatises of Plutarch hold a pivotal position.
Visa hela texten

Stephen T. Newmyer is Professor Emeritus of Classics at Duquesne University in Pittsburgh, USA. He has published extensively on classical views on the intellectual and emotional dimensions of non-human animals, and is the author of Animals, Rights and Reason in Plutarch and Modern Ethics (Routledge, 2006), Animals in Greek and Roman Thought: A Sourcebook (Routledge, 2011) and The Animal and the Human in Ancient and Modern Thought: The 'Man Alone of Animals' Concept (Routledge, 2017).