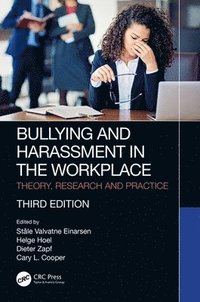 Bullying and Harassment in the Workplace

av Stale Valvatne Einarsen, Helge Hoel, Dieter Zapf, Cary L Cooper
Häftad Engelska, 2020-04-29
1539
Köp
Spara som favorit
Finns även som
Visa alla 4 format & utgåvor
Building on the success of two earlier best-selling editions from 2003 and 2011, this benchmark text and highly cited reference work now appears in its third edition. This book is a research-based resource on key aspects of workplace bullying and its remediation, which: Covers the nature and complexities of bullying and harassment in the workplace Presents the evidence on its prevalence, risk groups, antecedents and outcomes Examines cyberbullying and harassment in the digital world Describes the roles of bystanders and the coping possibilities of victims Discusses prevention, intervention, treatment and the management of specific cases Explains legal perspectives, the role of HR and of internal policies Edited by leading experts in the field and presenting contributions from subject experts, it provides state-of-the-art reviews of the main themes in the field, as well as practical remedies and solutions at individual, organizational and societal levels, providing a much-needed update and expansion of the original work, as the research and literature on this problem with its manifold detrimental effects has expanded radically over the last decade. This book should be of interest to all scholars in the field of organizational behavior and social processes at work. In particular, the book is a much-needed tool for bachelor, master and PhD students, new and experienced researchers in the field, advanced practitioners and policy makers, including labor inspectors, union representatives, HR-personnel, lawyers, management consultants, and counsellors in private practice, family physicians and occupational health practitioners, to name a few.
Visa hela texten

Stale Valvatne Einarsen is Professor of Work and Organizational Psychology at the Faculty of Psychology at Bergen University (Norway), where he acts as head of the Bergen Bullying Research Group. Einarsen is the most cited researcher in the field of workplace bullying internationally and has published intensively on this and related issues since the early 1990ies. He was among the founding members of the International Association on Workplace Bullying and Harassment (IAWBH) which was established in 2008 and served two terms on the board of the association Helge Hoel is Professor Emeritus at the University of Manchester and a recognised international expert on bullying and harassment in the workplace, and has carried out several influential studies related to these issues. He has written and contributed to a number of books, articles and reports in the area of bullying, violence and harassment, including commissioned works for the International Labour Organization (ILO) and the European Parliament. He is a former Director of the University of Manchester Fairness at Work Research Centre (FairWRC),now integrated into the Work and Equalities Institute (WEI). Dieter Zapf is a Professor for Work and Organizational Psychology and Scientific Director at the Center for Leadership and Behavior in Organizations (CLBO) at the Johann Wolfgang Goethe-University Frankfurt, Germany, and Visiting Professor at Manchester Business School, Manchester, UK.. He has long standing experience in organizational stress research with a focus on stress-related job analysis, emotion work and workplace bullying. Zapf organized the first symposium on workplace bullying at an important international congress (EAWOP, Gyor 1996). He also served as an associate editor for the European Journal of Work and Organizational Psychology and the Journal of Occupational and Organizational Psychology. Sir Cary L. Cooper is the 50th Anniversary Professor of Organizational Psychology and Health at the Manchester Business School, University of Manchester. Before moving to Manchester he was Distinguished Professor at Lancaster University. Cooper was also head of the Manchester School of Management (within UMIST) from the early 80s. In 1995 he became Pro-Vice-Chancellor and then Deputy Vice-Chancellor of UMIST until 2002. From 1979 to 1980 he was chairman of the Management Education and Development Division of the Academy of Management and was the Founding President of the British Academy of Management. He has also been Chair of the Academy of Social Sciences, President of the Chartered Institute of Personnel and Development, president of the British Association for Counselling and Psychotherapy. He was the founding editor-in-chief of the Journal of Organizational Behavior.