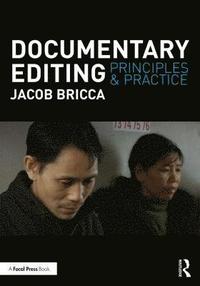 av Ace Bricca Jacob
Häftad Engelska, 2017-12-14
429
Köp
Spara som favorit
Fåtal ex i lager. Skickas inom 1-2 vardagar.
Fri frakt inom Sverige för privatpersoner.
Finns även som
Visa alla 1 format & utgåvor
Documentary Editing offers clear and detailed strategies for tackling every stage of the documentary editing process, from organizing raw footage and building select reels to fine cutting and final export. Written by a Sundance award- winning documentary editor with a dozen features to his credit and containing examples from over 100 films, this book presents a step-by-step guide for how to turn seemingly shapeless footage into focused scenes, and how to craft a structure for a documentary of any length. The book contains insights and examples from seven of America's top documentary editors, including Geoffrey Richman (The Cove, Sicko), Kate Amend (The Keepers, Into the Arms of Strangers), and Mary Lampson (Harlan County U.S.A.), and a companion website contains easy-to-follow video tutorials. Written for both practitioners and enthusiasts, Documentary Editing offers unique and invaluable insights into the documentary editing process.
Visa hela texten

"Anyone involved in the intellectually-challenging and labor-intensive work of documentary editing will find this book an essential companion. Whether you are a novice editor or an experienced hand, Bricca's unwavering faith in the process of editing will guide you securely down the bumpy road to the finished film." -Julie Sloane, Tisch School of the Arts, New York University "Jacob Bricca's Documentary Editing is a critical addition to the documentary filmmaker, editor, or professor's collection. In fifteen years of filmmaking and teaching I have not come across such a straight-forward, cohesive, and useful manual for how to tackle that most daunting of challenges: editing the documentary film." -Sally Rubin, Documentary Filmmaker, Editor; Professor, Chapman University "The book finishes up with an analysis of four films, two feature length and two short. Along the way a multitude of other narrative documentaries are discussed and analyzed. Bricca's writing is clear and focused." -Conrad J. Obregon "Author, educator and film editor Jacob Bricca asks the question in the introduction to this how-to book on editing the documentary and then spends the next 240 pages providing a very satisfying answer. He clearly reminds us of the difference and relative ease of editing a narrative fiction film, in which 'by and large, we already know the intention of every scene and the approximate purpose of every shot.' Compare that to the twists and turns that often occur in the filming process of documentary, where the filmmaker may think they are making one film at the start, and by the end of filming, the meaning or purpose of the available footage is still debatable. It is a well-accepted truism that in documentary film practice 'the story is created in the editing room.' There is much to recommend in this book for teaching in film production classes, but as a writer I found that certain elements could be applied to my own editing in words, rather than pictures. Ultimately, Bricca unravels the complexity of editing, demystifying the art of storytelling in the process." -Cynthia Close, Documentary Magazine, Fall 2018; "Reality Ink: The Zen of Editing: A Primer" "Jacob has done a great service to aspiring documentary editors by demystifying the creative process. Ideas don't come to an editor in a flash of inspiration. They come after hours of looking at footage, organizing clips and making connections. Jacob gives his students a process from which an insight or structure can emerge. He describes each step to show what should be happening in the little baby steps you make until the whole starts to form. The footage writes the script, and Jacob explains how to open the mind and heart to let it through." -Bee Ottinger, CEO, SnapCuts and Former Head of National Avid User Group

Jacob Bricca, ACE is an Associate Professor at the University of Arizona's School of Theatre, Film and Television, where he teaches classes on editing and documentary filmmaking. A member of the American Cinema Editors, he has edited over a dozen feature films, including the international theatrical hit Lost In La Mancha, the New Yorker Films theatrical release Con Artist, the Independent Lens Audience Award Winner Jimmy Scott: If You Only Knew, and the Sundance Special Jury Prize winner The Bad Kids. His directing credits include Pure, which screened at the 2008 Berlin International Film Festival, and Finding Tatanka, which premiered at the 2014 Big Sky Documentary Film Festival.