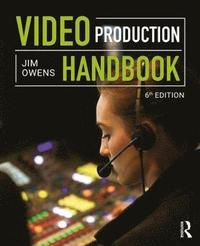 av Jim Owens
Häftad Engelska, 2017-04-06
579
Köp
Spara som favorit
Finns även som
Visa alla 5 format & utgåvor
This new edition of the Video Production Handbook walks students through the full video production process, from inception of idea to final distribution. Concentrating on the techniques and concepts behind the latest equipment, this book demonstrates the fundamental principles needed to create good video content on any kind of budget. Ideal for students, the new edition features a new chapter on directing and updated information on the latest DSLR and cinema cameras, LED lighting and much more. A companion website with additional resources for professors rounds out this full-color, highly visual text to meet all of your video production learning needs.
Visa hela texten

Jim Owens has worked and taught in the video and television industry for over 30 years. As an Emmy Award-winning producer, he has worked on local, regional, and national productions. Owens' international television work has included 14 Olympic broadcasts and has taken him to over 25 countries. He is the author of the Video Production Handbook, Television Production, and Television Sports Production, and has had over 30 articles published in television and broadcast magazines in the United States and Europe. He also served as the curator of the History of Olympic Broadcasting exhibit at the Olympic Museum in Lausanne, Switzerland. Owens is Dean of the School of Communication Arts at Asbury University in Wilmore, Kentucky, where he has taught since 1981.