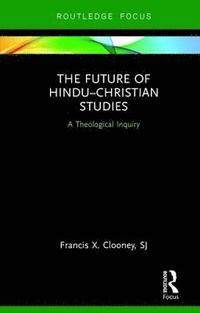 The Future of Hindu-Christian Studies

av Francis X Clooney
Inbunden Engelska, 2017-06-19
579
Köp
Spara som favorit
Finns även som
Visa alla 3 format & utgåvor
The field of Hindu-Christian studies revives theology as a particularly useful interreligious discipline. Though a sub-division of the broader Hindu-Christian dialogue, it is also a distinct field of study, proper to a smaller group of religious intellectuals. At its best it envisions a two-sided, mutual conversation, grounded in scholars' knowledge of their own tradition and of the other. Based on the Westcott-Teape Lectures given in India and at the University of Cambridge, this book explores the possibilities and problems attendant upon the field of Hindu-Christian Studies, the reasons for occasional flourishing and decline in such studies, and the fragile conditions under which the field can flourish in the 21st century. The chapters examine key instances of Christian-Hindu learning, highlighting the Jesuit engagement with Hinduism, the modern Hindu reception of Western thought, and certain advances in the study of religion that enhance intellectual cooperation. This book is a significant contribution to a sophisticated understanding of Christianity and Hinduism in relation. It presents a robust defense of comparative theology and of Hindu-Christian Studies as a necessarily theological discipline. It will be of wide interest in the fields of Religious Studies, Theology, Christianity and Hindu Studies.
Visa hela texten

As he clearly demonstrates in this book, the field of Hindu-Christian studies is both blessed and burdened with a relatively long, mixed ancestry and while some readers will want to question Clooney's emphasis on the theological (rather than, say, the anthropological or sociological) aspects of Hindu-Christian engagements, and may also find his focus on Roman Catholic (Jesuit) figures too narrow, they will nevertheless find here a thoroughly readable account of a series of fascinating historical interactions. Daniel J. Soars, Clare College, University of Cambridge Francis X. Clooney, SJ, a pioneer in developing the method of 'comparative theology' through his own study of Hinduism, offers us an excellent and illustrative introduction to it by telling us the story of Hindu-Christian studies in India from an analytic perspective. The missionary approach of Christians and the defensive reaction of Hindus slowly evolve, helped by the modern study of religion, into the discovery of a common space where faith can meet faith without abandoning intellectual rigour or religious identity. Clooney carefully points to both the challenges and benefits of intelligent, attentive, theologically grounded exchange. The book is a 'must read' for anyone interested in comparative theology and in Hindu-Christian studies. Michael Amaladoss, S.J., Director of the Institute for Dialogue with Cultures and Religions, India Francis X. Clooney, SJ, has carefully mapped Christian-Hindu interactions since their inception to now, demonstrating the longevity, sophistication, and complexity of those interactions, attending carefully to perspectives in each tradition. Highlighting forgotten instances wherein each took the other seriously, and couched in a sympathetic and nuanced Catholic theological perspective, The Future of Hindu-Christian Studies also addresses important issues arising in theology and religious studies today. Jonathan Edelmann, Assistant Professor of Religion, University of Florida, USA, and Affiliate Member, Center for the Study of Hindu Traditions Judiciously and with characteristic lucidity, Francis X. Clooney analyzes various past and present attempts at Hindu-Christian Studies. His is one of the most interesting voices in the field of comparative theology today, challenging all scholars to revitalize their approach to dialogue and traverse new frontiers of academic and spiritual knowledge. Anita C. Ray, Faculty of Theology and Philosophy, and Comparative Theology / Interreligious Dialogue Network, Australian Catholic University, Australia This insightful exploration of the history of intellectual engagement between Christians and Hindus also looks forward with clarity towards the prospects for continued dialogue. Clooney builds on his specialist scholarship to ask questions about the challenges facing comparative theology in the academy today, and offers insightful answers with sober optimism. Chakravarthi Ram-Prasad, Professor and Associate Dean for Research, Faculty of Arts and Social Sciences, Lancaster University, UK

Francis X. Clooney, SJ, is Parkman Professor of Divinity and Professor of Comparative Theology at Harvard Divinity School, Harvard University, USA. From 2010-2017, he was also the Director of the Center for the Study of World Religions. He is one of the foremost authorities in Hindu-Christian studies, and a leading proponent of comparative theology, a field of study which, though informed by philological scholarship and advances in the study of religion, respects the inner logic of faith traditions even while employing intellectual tools not defined by any one tradition.