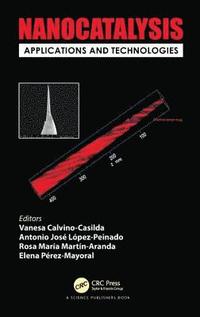 av Vanesa Calvino-Casilda, Antonio Jose Lopez-Peinado, Rosa Maria Martin-Aranda, Elena Perez Mayoral
Inbunden Engelska, 2019-03-26
2289
Köp
Spara som favorit
Kan levereras innan julafton!
Finns även som
Visa alla 3 format & utgåvor
Synthesis and design of new nanocatalysts is an important area of research that aims to introduce multiple types of useful applications in a greener market. The necessity of nanostructuring the active sites has emerged as the key point in a successful design of the catalysts. The book covers the progress in this research area done in the last ten years. It includes the classification of catalysts and structure of active sites at the nanoscale. The book covers examples to present the concept, evolution of nanocatalysts from the perspective of chemistry of materials and their applications.
Visa hela texten

Vanesa Calvino-Casilda (Madrid, Spain 1978) is a postdoctoral researcher at the National Distance Education University (UNED) from 2014. She obtained a BS in Chemistry (UNED) in 2002 and the European PhD in Chemistry (UNED) in 2008. During her PhD, she carried out two stints at Adam Mickiewicz University in Poland and the Heyrovsky Institute of Physical Chemistry in Prague. She got a PhD Prize for her active and productive PhD research (UNED, 2008). She has been a Research Associate at the Institute of Catalysis and Petrochemistry of the Spanish National Research Council (CSIC) for six years (2008-2013). During this time, she worked at the Catalytic Spectroscopy laboratory under the supervision of professor Miguel Angel Banares. She was responsible for developing a new line of research based on Raman monitoring of catalytic liquid phase reactions for the synthesis of fine chemicals. During this period, she carried out several stints at different research centers (CINDECA, Argentina; the University of Twente, Netherlands and PerkinElmer, London). Her research focuses on green chemistry, fine chemistry, catalysis and Raman Spectroscopy monitoring. She has participated in more than 20 research projects and has published 41 SCI journal publications, 8 book chapters and an Application Note with Perkin-Elmer. She is an author of 2 patents and has presented 89 communications at national and international conferences. One of these communications received the Award for the best paper presented on "Technological Innovation in Green Chemistry" at the 6th International Green Chemistry Conference, held in Barcelona in 2004. She has also been a guest editor in a special issue of Catalysis Today journal. During her active research career, she has also developed her teaching career at the Department of Inorganic and Technical Chemistry at UNED from 2004 working in several teaching activities (teaching support, research project supervision, laboratory practices, courses, Masters, Science Week, popular science publication and so on). Antonio Jose Lopez-Peinado (Guadix, Granada, Spain 1959) completed his studies of Chemistry in 1981, obtained the Bachelor Degree in 1982 and a PhD in 1984 from the University of Granada. During the period of his research training he enjoyed several postdoctoral fellowships at the University of Amsterdam, with Dr. JA Moulijn and at the Pennsylvania State University, with Drs J. Phillips and LJ Radovic in 1987 and 1991 respectively. He also received a grant from the Japanese government for a stint at the NIRE Tsukuba in 1993. He has taught Chemistry & Environmental Science postdoc levels, first at the University of Extremadura from 1987-1989, and then since 1989 at the National University of Distance Education. Since 2010, he is a Professor of Inorganic Chemistry at the National University of Distance Education (UNED). His research is focused on the synthesis and characterization of materials, surface chemistry, sustainable chemistry and catalysis. He has more than 80 scientific papers published in international journals, 3 patents and has actively participated in international conferences. His experiences include research and teaching at universities in Japan, Poland, Portugal and Cuba. He has directed 8 doctoral theses. He is a member of different societies and national and international scientific committees amongst which are the Spanish Royal Society of Chemistry and the Royal Society of Chemistry. His research group was awarded the prize for the work presented on "Technological Innovation in Green Chemistry" at the 6th International Green Chemistry Conference, held in Barcelona in 2004. Since 2005, he has been actively involved in outreach programs of Chemistry and Environment and has participated in activities organized by the Science Week of the Community of Madrid and the Faculty of Sciences of the UNED. Rosa Maria Martin-Aranda (Toledo, Spain, 1