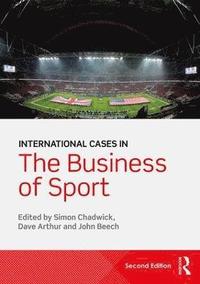 International Cases in the Business of Sport

Bloggat om International Cases in the Business of Sport

Simon Chadwick is Professor of Sports Enterprise at Salford University, Manchester, UK, where he is a member of the Centre for Sports Business. He also works as Director of Research at the Josoor Institute in Qatar. His interests are in the areas of sports business strategy, sports marketing, and geo-politics and sport. Chadwick has worked with some of the world's most important sports organisations including FC Barcelona, UEFA, the European Clubs Association and Adidas. His research has been published or covered by outlets ranging from Sloan Management Review to Newsweek and CNN to the Academy of Marketing Science. The Times of London has called him the 'guru of sport management'. Dave Arthur, in a previous life, was a well-respected and widely published lecturer and researcher who one day saw the light and who now plies his trade as a sought-after consultant and 'pracademic'. As CEO of Sport Business Resources he has undertaken diverse and interesting sports business projects that have seen him work with some of Australia's best professional franchises. His burning entrepreneurial desire has recently seen him set up the Institute of Sport - an online start-up that aims to disrupt tertiary education and equip sport business professionals with the skills to lead and manage sport. John Beech is an Honorary Research Fellow at Coventry University, UK. He is an International Professor at the Russian International Olympic University in Sochi, Russia, and has held the post of Visiting Professor at FH Kufstein University of Applied Sciences in Austria, and at the Instituto de Empresa Business School in Spain. He currently lectures at universities in Sochi (Russia), Jyvaskyla (Finland), Paris (France), Split (Croatia), and Karlsruhe and Salzgitter (Germany). He has published widely, including both research articles and textbooks, and his research has been reported in national newspapers in the UK and across Europe.