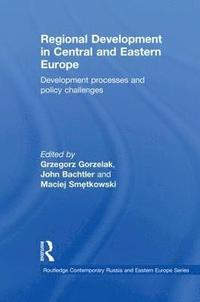 av Grzegorz Gorzelak, John Bachtler, Maciej Smetkowski
Häftad Engelska, 2014-08-15
689
Köp
Spara som favorit
Skickas inom 10-15 vardagar.
Fri frakt inom Sverige för privatpersoner.
Finns även som
Visa alla 3 format & utgåvor
This book provides an up-to-date assessment of the main processes and dilemmas of regional development and regional policy in the newer European Union Member States in Central and Eastern Europe and neighbouring countries. It highlights the difficulties of balancing the demands within the new Member States for rapid regional growth and development with, firstly, the demands of the European Union overall that restructuring and development should conform to the aims and principles of EU common policies; and, secondly, with budgetary constraints. The book covers a wide range of issues, including global and national challenges to regional convergence and cohesion; regional dynamics, city networks and border issues; the effectiveness of policy responses at national and European levels, including an assessment of policy experiences from outside the new Member States; and likely future developments.
Visa hela texten

Grzegorz Gorzelak is Professor of Economics, and Director of the Centre for European Regional and Local Studies (EUROREG) at Warsaw University, Poland. He is president of the Polish Section of the Regional Studies Association. He is co-editor of Integration and Transition in Europe: the economic geography of integration (also published by Routledge), and (with John Bachtler) Transition, Cohesion and Regional Policy in Central and Eastern Europe. John Bachtler is Professor of European Policy Studies and a Director of the European Policies Research Centre, University of Strathclyde, UK. His many publications include The Coherence of EU Regional Policy: Contrasting Perspectives on the Structural Funds. Maciej Smetkowski is a geographer at EUROREG, University of Warsaw, Poland. He is co-editor of Cross-border Co-Operation of Poland after EU Enlargement: Focus on Eastern Border.