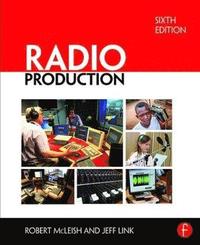 av Robert McLeish, Jeff Link
Häftad Engelska, 2015-10-05
639
Köp
Spara som favorit
Skickas inom 7-10 vardagar.
Fri frakt inom Sverige för privatpersoner.
Finns även som
Visa alla 4 format & utgåvor
Radio Production is for professionals and students interested in understanding the radio industry in today's ever-changing world. This book features up-to-date coverage of the purpose and use of radio with detailed coverage of current production techniques in the studio and on location. In addition there is exploration of technological advances, including handheld digital recording devices, the use of digital, analogue and virtual mixing desks and current methods of music storage and playback. Within a global context, the sixth edition also explores American radio by providing an overview of the rules, regulations, and purpose of the Federal Communications Commission. The sixth edition includes: Updated material on new digital recording methods, and the development of outside broadcast techniques, including Smartphone use. The use of social media as news sources, and an expansion of the station's presence. Global government regulation and journalistic codes of practice. Comprehensive advice on interviewing, phone-ins, news, radio drama, music, and scheduling. This edition is further enhanced by a companion website, featuring examples, exercises, and resources: www.focalpress.com/cw/mcleish.
Visa hela texten

"There are other practical textbooks on the market, but none which combines instruction in the how and why of local broadcasting quite as effectively." Broadcast Magazine "An exceptionally well presented, thorough, and useful book." Bill Dorris, Lecturer, School of Communications, Dublin City University, Ireland "Radio Production: 6th Edition belongs on the shelves of every radio station in the UK and beyond, regardless of size. There is something to be learnt from this book by everyone involved in broadcasting at any level." -Radio User Magazine

After 33 years with BBC Radio, Robert McLeish was a consultant in the United States, Australia, Russia, India, and beyond. He has written and lectured in academia and served on the boards of international broadcasting organizations. Jeff Link's work in broadcasting spans radio, television, and multimedia. His expertise lies in sound mixing, reporting, presenting, and productions, and he serves as an independent media consultant.