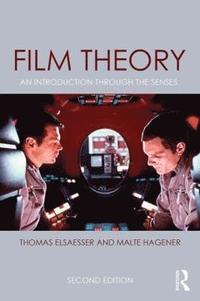 An Introduction through the Senses

av Thomas Elsaesser, Malte Hagener
Häftad Engelska, 2015-05-15
589
Köp
Spara som favorit
Kan levereras innan julafton!
Finns även som
Visa alla 4 format & utgåvor
What is the relationship between cinema and spectator? This is the key question for film theory, and one that Thomas Elsaesser and Malte Hagener put at the center of their insightful and engaging book, now revised from its popular first edition. Every kind of cinema (and every film theory) first imagines an ideal spectator, and then maps certain dynamic interactions between the screen and the spectator's mind, body and senses. Using seven distinctive configurations of spectator and screen that move progressively from 'exterior' to 'interior' relationships, the authors retrace the most important stages of film theory from its beginnings to the present-from neo-realist and modernist theories to psychoanalytic, 'apparatus,' phenomenological and cognitivist theories, and including recent cross-overs with philosophy and neurology. This new and updated edition of Film Theory: An Introduction through the Senses has been extensively revised and rewritten throughout, incorporating discussion of contemporary films like Her and Gravity, and including a greatly expanded final chapter, which brings film theory fully into the digital age.
Visa hela texten

Thomas Elsaesser is Professor Emeritus of Film and Television Studies at the University of Amsterdam and since 2012 Visiting Professor at Columbia University. His recent books include: Weimar Cinema and After (Routledge, 2000); Metropolis (BFI, 2000); Studying Contemporary American Film (Hodder, 2002, with Warren Buckland); European Cinema: Face to Face with Hollywood (Amsterdam University Press, 2005); The Persistence of Hollywood (Routledge, 2012); and German Cinema - Terror and Trauma (Routledge, 2013). Malte Hagener is Professor of media studies at Marburg University. He has written Moving Forward, Looking Back: The European Avant-garde and the Invention of Film Culture, 1919-1939 (Amsterdam University Press, 2008) and edited many volumes, including The Emergence of Film Culture (Berghahn, 2014).

Introduction: Film Theory, Cinema, the Body and the Senses 1. Cinema as Window and Frame 2. Cinema as Door - Screen and Threshold 3. Cinema as Mirror - Face and Close-Up 4. Cinema as Eye - Look and Gaze 5. Cinema as Skin - Body and Touch 6. Cinema as Ear - Acoustic and Space 7. Cinema as Brain - Mind and Body 8. Digital Cinema and Film Theory - Challenge or Confirmation?