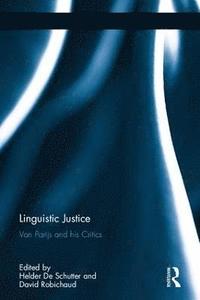 Van Parijs and his Critics

av David Robichaud, Helder De Schutter
Inbunden Engelska, 2015-11-30
1479
Köp
Spara som favorit
Skickas inom 10-15 vardagar.
Fri frakt inom Sverige för privatpersoner.
Finns även som
Visa alla 3 format & utgåvor
The world contains over 6000 languages and less than 200 states to accommodate them. This creates the important normative question of how to respond politically to linguistic diversity. What is a just language policy? Are language minorities entitled to language protection? Should language rights be accorded to immigrants? Is the universal rise of English as a lingua franca to be applauded or to be regretted? The most important and comprehensive thinker within this debate over linguistic justice is Philippe Van Parijs. In his bold and controversial theory of linguistic justice, Van Parijs argues that the rise of English is a good thing, as well as that all language groups are entitled to grab a territory on which only their language receives public recognition. This collection, bringing together some of the most influential contemporary political philosophers, presents a critical review of Van Parijs's theory and gives a state-of-the-art overview of the prevailing positions on linguistic justice within political philosophy. It will be of interest to students and scholars studying philosophy, politics, linguistics, international relations and law. This book was published as a special issue of Critical Review of International Social and Political Philosophy.
Visa hela texten

Helder De Schutter is Assistant Professor in Social and Political Philosophy at KU Leuven. In 2013-2014, he will be a visiting faculty member at Princeton University supported by a Fung Global Fellowship. He works on linguistic justice, federalism and nationalism. He has held positions at Princeton University, the University of Oxford (Nuffield College) and at the Facultes Universitaires Saint-Louis (Brussels). He is also a guest professor at Universite Catholique de Louvain-la-Neuve. Publications have appeared in journals like Inquiry, The Journal of Political Philosophy, Journal of Applied Philosophy, Metaphilosophy, CRISPP, and Politics, Philosophy, and Economics. David Robichaud is Assistant Professor in Moral and Political Philosophy at the University of Ottawa and a member of the Groupe de Recherche Interuniversitaire sur la Normativite (GRIN). His research project "(Dis)trust in diverse societies" is financed by the Social Sciences and Humanities Research Council of Canada and has led to many publications. He also works on questions of social justice, his most recent publication on the subject being La juste part, an essay offering a new approach to questions of redistribution. The book was praised by the academic community, the media and the larger public and is in the process of being translated in English, Spanish and Cantonese. Finally, his work on linguistic justice has been published or accepted for publication in many journals and collective books, including most recently the Cambridge Companion to Language Policy (2012) and Philosophiques (2012). He is also co-editor of the online journal Ethics and Economics."

1. Van Parijsian linguistic justice - context, analysis and critiques Helder De Schutter and David Robichaud 2. What is language? A response to Philippe van Parijs Sue Wright 3. The problem with English(es) and linguistic (in)justice. Addressing the limits of liberal egalitarian accounts of language Stephen May 4. Lingua franca fever: sceptical remarks Denise Reaume 5. Cooperative justice and English as a lingua franca: the tension between optimism and Anglophones free riding David Robichaud 6. Language, dignity, and territory Anna Stilz 7. One-way conversation with Philippe Van Parijs Jean Laponce 8. Can parity of self-esteem serve as the basis of the principle of linguistic territoriality? Daniel Weinstock 9. The political value of languages Rainer Bauboeck 10. Lingua franca and linguistic territoriality. Why they both matter to justice and why justice matters for both Philippe Van Parijs