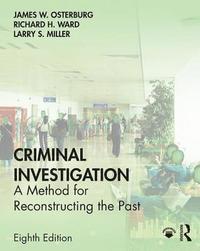 A Method for Reconstructing the Past

av James W Osterburg, Richard H Ward, Larry S Miller
Häftad Engelska, 2019-05-10
1059
Köp
Spara som favorit
Skickas inom 5-8 vardagar.
Fri frakt inom Sverige för privatpersoner.
Finns även som
Visa alla 6 format & utgåvor
A classic in the field, Criminal Investigation: A Method for Reconstructing the Past, Eighth Edition, presents the fundamentals of criminal investigation and provides a sound method for reconstructing a crime based on three major sources of information: people, physical evidence, and records. By breaking information sources into these three major components, the book provides a logical approach that helps students remember and achieve mastery of these essentials. More than a simplistic introductory text, yet written in an easy-to-read, user-friendly format, it offers a broad treatment of criminal investigation. Updated and streamlined since the prior edition, the text covers the foundations and principles of criminal investigation, analysis of specific crimes, and explores special topics including enterprise crime, arson and explosives, computers and technological crime, increasing threats and emerging crime, and terrorism and urban disorder. This discussion of contemporary and future criminal activity teaches students facts about the present as well as the skills to stay current in a rapidly changing field. This book is indispensable for core courses in criminal investigation. Chapters include a variety of helpful charts, tables, and illustrations, as well as discussion questions that provide focus on the most important points. A glossary provides definitions for terms that have specialized meanings, and an online companion site offers an array of resources for both students and instructors.
Visa hela texten

James W. Osterburg was long involved in the investigation process, actively engaged in the functions of teaching, research, and public service. For 20 years, he served the New York City Police Department (NYPD), where he assisted in the investigation of thousands of crimes. He testified in municipal, state, and federal courts on numerous occasions, and taught at the NYPD Police Academy. His academic affiliations include professorships at the University of Illinois at Chicago; Indiana University; the University of California, Berkeley; the Baruch School of Public Administration at the City University of New York; and Sam Houston State University (as Beto Professor of Criminal Justice). He is the author of several books on criminalistics and scientific investigation. Osterburg was a Fellow and past president of the American Academy of Forensic Sciences (AAFS) and was recipient of the 2010 Paul L. Kirk Award, the highest award conferred by the AAFS Criminalistics Section. Richard H. Ward was, at the time of his death, Associate Vice President for Research and Special Programs at the University of New Haven. A former New York City Police Department (NYPD) Detective, Ward was an internationally recognized expert on issues related to criminal investigation, terrorism, and global crime. He earned a master's degree from the John Jay College of Criminal Justice and a Ph.D. in criminology from the University of California, Berkeley. He began teaching at John Jay in 1970, eventually moving into administration, and in 1977, joined the University of Illinois, Chicago (UIC), where he was Vice Chancellor of administration for 16 years, then founder and Executive Director of UIC's Office of International Criminal Justice. From 2008 to 2012, he served as Dean of the Henry C. Lee College of Criminal Justice and Forensic Sciences at the University of New Haven. Ward visited more than 50 countries and taught in China, Malaysia, Thailand, Egypt, and Saudi Arabia. Larry S. Miller is Distinguished Professor and Chair of the Department of Criminal Justice and Criminology and Director of the Forensic Document Examination graduate program at East Tennessee State University (ETSU). He received his Bachelor of Science from ETSU, a Master of Science in Criminal Justice from Eastern Kentucky University, and his Ph.D. in Public Health & Safety with collaterals in Forensic Anthropology and Criminology from The University of Tennessee. Miller, who has worked as a police officer for two state police agencies in Tennessee and Kentucky, criminal investigator and Chief of Detectives with the Washington County (TN) Sheriff's Office, crime scene investigator with the Sullivan County (TN) Sheriff's Office, and Director of the Tennessee Regional Crime Laboratory at Walters State Community College (TN), teaches in the areas of law enforcement and forensic science and is the author of several books on topics including forensic document examination, criminal investigation, criminal justice report writing, police photography, and more. He serves on the board of the National Forensic Academy.