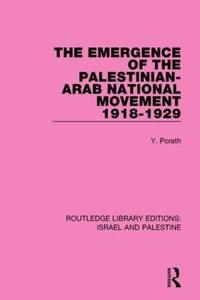 The Emergence of the Palestinian-Arab National Movement, 1918-1929

av Yehoshua Porath
Häftad Engelska, 2016-11-09
479
Köp
Spara som favorit
Finns även som
Visa alla 1 format & utgåvor
The resurgence of Palestinian nationalism in the wake of the 1967 Arab-Israeli war tended to overshadow the fact that Palestinian national consciousness is not a new phenomenon, but traces its origins back to the time when the first stirrings of nationalism were being felt in many parts of the under-developed world. This work, first published in 1974, is based on both Arabic and Hebrew primary sources as well as English and French official and unofficial documents, and was the first detailed study of the infancy period of Palestinian nationalism. The book begins by establishing the position of Palestine and Jerusalem in Islamic history and their significance within the concepts of Islam, and outlines the social and political features of the Palestinian population at the beginning of the First World War. The author then charts in detail the development of Palestinian nationalism over the decade after the War. Two major forces influenced this development and reacted with it: Zionism, with its ambitious schemes for settling Jews in Palestine and creating a National Home for them there, and Arab nationalism on a wider scale, which was emerging spontaneously with the disintegration of the Ottoman Empire and the spreading of ideas of self-determination. The growing threat posed by Zionism awoke the Palestinian population to the need for organization and the establishment of their own identity to oppose it, while the focus of their national aspirations widened or narrowed according to the ability which they felt at any given time to confront Zionism and achieve self-expression within a Palestinian rather than an all-Syrian national framework. The events of these turbulent years - the confrontations with the British, delegations, boycotts, proposals and rejections, the emergence of al-Hajj Amin al-Husayni, the Wailing Wall conflict and its repercussions - are all described within the context of these wider considerations, which also include Britain's own role as holder of the Mandate over Palestine.
Visa hela texten

Introduction. The Religious Status of Jerusalem and Palestine in Medieval Islam. The Filastin as an Administrative Unit in Muslim History. The Structure of the Palestinian Population. Political Trends among the Palestinians on the Eve of the First World War. 1. The Rejection of Zionism and the Crystallization of Palestinian-Arab Ideology 1.1. The Anti-Zionist Awakening at the End of the First World War and its Causes 1.2. The Palestinian-Arab Ideology 1.3. The Reality of Anti-Zionist Ideology 2. From 'Southern Syria' to Palestine 2.1. The Idea of the Unity of Palestine and Syria 2.2. The Organizational Instruments 2.3. The Triumph of the 'Southern Syria' Trend 2.4. The Idea of All-Syria Unity in Politics 2.5. The Supporters of Unity at the Peak of their Power 2.6. The Decline of the Idea of 'Southern Syria' 2.7. Palestine as the Object of Struggle 2.8. Neglect of the 'Southern Syria' Idea 3. Confrontation with the British Government 3.1. Activities in the Country 3.2. The First Delegation to Britain 3.3. The Boycott of the Elections to the Legislative Council 3.4. The Second Delegation - the Appeal to the Turks 3.5. More British Proposals and their Rejection 4. The Emergence of al-Hajj Amin al-Husayni 4.1. His Appointment as Mufti of Jerusalem 4.2. Establishment of the Supreme Muslim Council and its Emergence as al-Hajj Amin's Stronghold 5. The Origin of the Opposition and its Development 5.1. The Basic Reasons for the Emergence of the Opposition 5.2. Political and Organizational Development of the Opposition 5.3. The Opposition at the Peak of its Power 6. The Turning Point 1924-1929 6.1. The Weakening of the Executive Committee and the Change to its Political Position 6.2. The Agreement with the Opposition 7. The Conflict over the Wailing Wall and its Repercussions 8. Organizational and Social Aspects of the Development of the Movement 8.1. The Crystallization of the Organizational Framework throughout the Country 8.2. The Christian Communities and the Movement