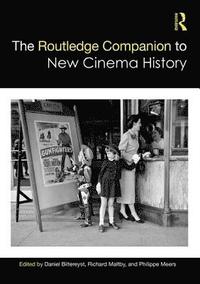 av Daniel Biltereyst, Richard Maltby, Philippe Meers
Inbunden Engelska, 2019-02-14
1419
Köp
Spara som favorit
Skickas inom 7-10 vardagar.
Fri frakt inom Sverige för privatpersoner.
Finns även som
Visa alla 3 format & utgåvor
The Routledge Companion to New Cinema History presents the most recent approaches and methods in the study of the social experience of cinema, from its origins in vaudeville and traveling exhibitions to the multiplexes of today. Exploring its history from the perspective of the cinemagoer, the study of new cinema history examines the circulation and consumption of cinema, the political and legal structures that underpinned its activities, the place that it occupied in the lives of its audiences and the traces that it left in their memories. Using a broad range of methods from the statistical analyses of box office economics to ethnography, oral history, and memory studies, this approach has brought about an undisputable change in how we study cinema, and the questions we ask about its history. This companion examines the place, space, and practices of film exhibition and programming; the questions of gender and ethnicity within the cinematic experience; and the ways in which audiences gave meaning to cinemagoing practices, specific films, stars, and venues, and its operation as a site of social and cultural exchange from Detroit and Laredo to Bandung and Chennai. Contributors demonstrate how the digitization of source materials and the use of digital research tools have enabled them to map previously unexplored aspects of cinema's business and social history and undertake comparative analysis of the diversity of the social experience of cinema across regional, national, and continental boundaries. With contributions from leading scholars in the field, The Routledge Companion to New Cinema History enlarges and refines our understanding of cinema's place in the social history of the twentieth century.
Visa hela texten

Bloggat om The Routledge Companion to New Cinema His...

Daniel Biltereyst is Professor in Film and Media Studies at Ghent University, Belgium, where he is also director of the Centre for Cinema and Media Studies (CIMS). His work deals with issues of media historiography, media controversy, and audience's media engagements. Richard Maltby is Matthew Flinders Distinguished Professor of Screen Studies at Flinders University, South Australia. A Fellow of the Australian Academy of the Humanities, he has published extensively on the cultural history of Hollywood, and has edited seven books on the history of cinema audiences, exhibition, and reception. Philippe Meers is Professor in Film and Media Studies at the University of Antwerp, Belgium, where he chairs the Center for Mexican Studies and is deputy-director of the Visual and Digital Cultures Research Center (ViDi). He has published widely on historical and contemporary film culture and audiences.