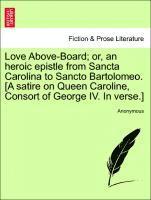 Love Above-Board; Or, an Heroic Epistle from Sancta Carolina to Sancto Bartolomeo. [a Satire on Queen Caroline, Consort of George IV. in Verse.]