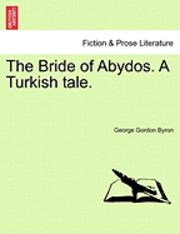 The Bride of Abydos. a Turkish Tale.