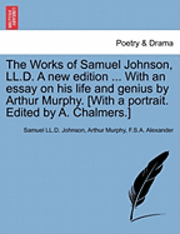 The Works of Samuel Johnson, LL.D. a New Edition ... with an Essay on His Life and Genius by Arthur Murphy. [With a Portrait. Edited by A. Chalmers.]

The POETRY & DRAMA collection includes books from the British Library digitised by Microsoft. The books reflect the complex and changing role of literature in society, ranging from Bardic poetry to Victorian verse. Containing many classic works from important dramatists and poets, this collection has something for every lover of the stage and verse.