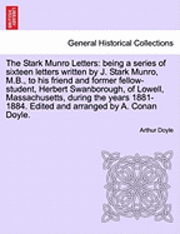 Being a Series of Sixteen Letters Written by J. Stark Munro, M.B., to His Friend and Former Fellow-Student, Herbert SW