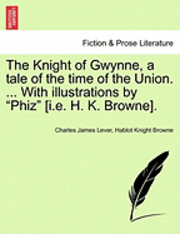 Bloggat om The Knight of Gwynne, a Tale of the Time ...