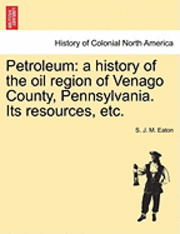 A History of the Oil Region of Venago County, Pennsylvania. Its Resources, Etc.

The HISTORY OF COLONIAL NORTH AMERICA collection includes books from the British Library digitised by Microsoft. This collection refers to the European settlements in North America through independence, with emphasis on the history of the thirteen colonies of Britain. Attention is paid to the histories of Jamestown and the early colonial interactions with Native Americans. The contextual framework of this collection highlights 16th century English, Scottish, French, Spanish, and Dutch expansion.