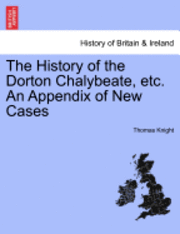 The History of the Dorton Chalybeate, Etc. an Appendix of New Cases

Bloggat om The History of the Dorton Chalybeate, Etc...