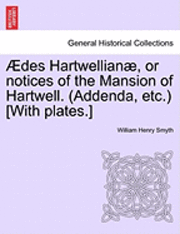 Des Hartwellian , or Notices of the Mansion of Hartwell. (Addenda, Etc.) [With Plates.]