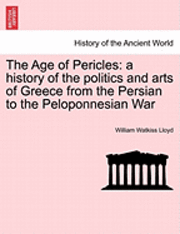 The Age of Pericles

The HISTORY OF THE ANCIENT WORLD collection includes books from the British Library digitised by Microsoft. Titles in this series include lectures, compiled sketches, and chronological discourses on Greece, Rome, and other early European and African civilisations. The collection also has a selection of physical and classical geography texts.