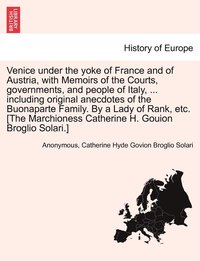 Venice Under the Yoke of France and of Austria, with Memoirs of the Courts, Governments, and People of Italy, ... Including Original Anecdotes of the Buonaparte Family. by a Lady of Rank, Etc. [The