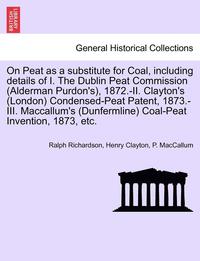 On Peat as a Substitute for Coal, Including Details of I. the Dublin Peat Commission (Alderman Purdon's), 1872.-II. Clayton's (London) Condensed-Peat Patent, 1873.-III. MacCallum's (Dunfermline)