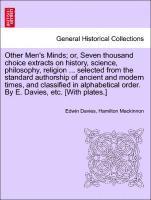 Other Men's Minds; Or, Seven Thousand Choice Extracts on History, Science, Philosophy, Religion ... Selected from the Standard Authorship of Ancient and Modern Times, and Classified in Alphabetical