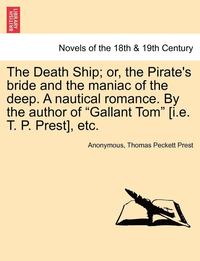 The Death Ship; Or, the Pirate's Bride and the Maniac of the Deep. a Nautical Romance. by the Author of Gallant Tom [I.E. T. P. Prest], Etc.

The NOVELS OF THE 18th & 19th CENTURIES collection includes books from the British Library digitised by Microsoft. The collection includes major and minor works from a period which saw the development and triumph of the English novel. These classics were written for a range of audiences and will engage any reading enthusiast.

Bloggat om The Death Ship; Or, the Pirate's Bride an...