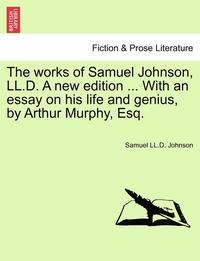 The Works of Samuel Johnson, LL.D. a New Edition ... with an Essay on His Life and Genius, by Arthur Murphy, Esq. Vol. X, a New Edition

++++
The below data was compiled from various identification fields in the bibliographic record of this title. This data is provided as an additional tool in helping to insure edition identification:
++++
British Library
Johnson, Samuel LL.D.
1796
12 vol. ; 8.
12269.d.1.