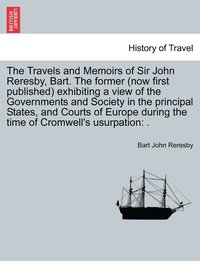 The Travels and Memoirs of Sir John Reresby, Bart. the Former (Now First Published) Exhibiting a View of the Governments and Society in the Principal States, and Courts of Europe During the Time of

The HISTORY OF TRAVEL collection includes books from the British Library digitised by Microsoft. This collection contains personal narratives, travel guides and documentary accounts by Victorian travelers, male and female. Also included are pamphlets, travel guides, and personal narratives of trips to and around the Americas, the Indies, Europe, Africa and the Middle East.

++++
The below data was compiled from various identification fields in the bibliographic record of this title. This data is provided as an additional tool in helping to insure edition identification:
++++
British Library
Reresby, Bart John
1813
xii, 214 p. ; 8.
G.2813.

Bloggat om The Travels and Memoirs of Sir John Reres...