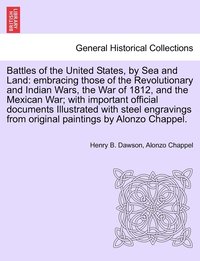 Battles of the United States, by Sea and Land

Embracing Those of the Revolutionary and Indian Wars, the War of 1812, and the Mexican War; With Important Official Documents Illustrated with Steel Engravings from Original Paintings by Alonzo Chappel.

++++
The below data was compiled from various identification fields in the bibliographic record of this title. This data is provided as an additional tool in helping to insure edition identification:
++++
British Library
Dawson, Henry B.; Chappel, Alonzo
1858
2 vol. ; 4.
9603.f.10.