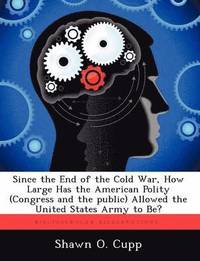 Since the End of the Cold War, How Large Has the American Polity (Congress and the Public) Allowed the United States Army to Be?

av Shawn O Cupp
Häftad Engelska, 2012-08-01
629
Köp
Spara som favorit
Skickas inom 10-15 vardagar.
Fri frakt inom Sverige för privatpersoner.
During the post-Cold War era (9 November 1989 to 10 September 2001) a number of factors influenced the American polity (Congress and the American public) with regards to the size of the U.S. Army. The research question investigates how these factors influenced the U.S. Army size and whether the Army ever was not ready to conduct assigned missions because of these factors. These influences began with the fall of the Berlin Wall and continued with the subsequent demise of the Soviet Union. The need for a large military force diminished when the USSR imploded and the US was the sole remaining superpower. The American polity called for a "peace dividend" and a dramatic drawdown of Army budget outlays and force structure occurred. The attitudes of the American public changed with regards to the military. A perceived military-civilian "gap" arose during this period of great turmoil. Also, during this period of time four Base Realignment and Closure commissions were conducted and reduced the Army infrastructure both in Continental United States and Overseas of Continental United States locations. The number of deployments that the Army conducted increased considerably, with more missions of peacekeeping and peace making rather than combat operations.
Visa hela texten

Bloggat om Since the End of the Cold War, How Large ...