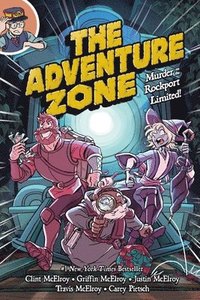 Murder on the Rockport Limited!

av Carey Pietsch, Clint Mcelroy, Griffin Mcelroy, Justin Mcelroy, Travis Mcelroy
(4 röster)
Häftad Engelska, 2019-07-16
179
Köp
Spara som favorit
Skickas inom 7-10 vardagar.
Fri frakt inom Sverige för privatpersoner.
Finns även som
Visa alla 1 format & utgåvor
In the second Adventure Zone graphic novel (adapted from the McElroy family's wildly popular D&D podcast), we rejoin hero-adjacent sort-of-comrades-in-arms Taako, Magnus, and Merle on a wild careen through a D&D railroad murder mystery. This installment has a little of everything: a genius child detective, an axe-wielding professional wrestler, a surly wizard, cursed magical artifacts, and a pair of meat monsters. You know, the usual things you find on a train. Hot on the heels of The Adventure Zone: Here There Be Gerblins, the smash hit graphic novel that launched the series, Murder on the Rockport Limited picks up the saga where volume 1 left off. Both books are based on The Adventure Zone, a tabletop RPG comedy podcast with downloads numbering in the tens of millions and an army of passionately devoted fans. With art and co-adaptation from Carey Pietsch, the McElroys are once again turning their raucous freewheeling D&D campaign into some damn fine comics.
Visa hela texten

It's tough to adapt anything into a comic, but especially to go from an audio-only medium to a visual-only one, but Pietsch in particular knocks it out of the park. - Paste Magazine Murder on the Rockport Limited delivers on every possible expectation. Fans of the original podcast will not be disappointed -Tor.com The story is fun, the artwork continues to be fantastic, and it's a great read for fans of goofy adult fantasy, whether you're a veteran D&D player or you just love irreverent jokes about Garfield, stealing from small children, or Tom Bodett. - Winter is Coming This arc is stuffed to the gills with excitement -- a murder mystery, some brand new NPCs, and a whole lot of wayward wizardry and other questionable hijinks. - Nerds and Beyond

Meet the McElroys! Clint was born first, which recent studies have shown is the best procedure for fathers and sons; then came Justin, Travis, and, last but not least, Griffin. This hilarious family gained fame in the world of podcasts with My brother My brother and Me (which spawned a popular tv show), sawbones, shmanners, rosebuddies, and a farcical romp called The Adventure Zone. Carey Pietsch is a cartoonist based out of Brooklyn, New York. Her previous work includes drawing two arcs of Lumberjanes and the artwork for the Mages of Mystralia webcomic. Carey also makes Keepsakes and other original comics about magic and empathy. Along with brightening her workdays, The Adventure Zone got her to join a D&D campaign.