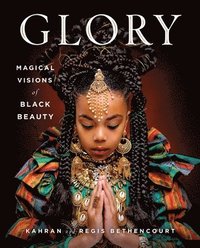 av Kahran Bethencourt, Regis Bethencourt
Inbunden Engelska, 2021-01-05
269
Köp
Spara som favorit
Skickas inom 5-8 vardagar.
Gratis frakt inom Sverige över 159 kr för privatpersoner.
Finns även som
Visa alla 1 format & utgåvor
From the dynamite husband-and-wife duo behind CreativeSoul Photography comes GLORY, a photography book that shatters the conventional standards of beauty for Black children. With stunning images of natural hair and gorgeous, inventive visual storytelling, GLORY puts Black beauty front and center with more than 100 breathtaking photographs and a collection of powerful essays about the children. At its heart, it is a recognition and celebration of the versatility and innate beauty of Black hair, and Black beauty. The glorious coffee-table book pays homage to the story of our royal past, celebrates the glory of the here and now, and even dares to forecast the future. It brings to life past, present, and future visions of Black culture and showcases the power and beauty of recognizing and celebrating oneself. Beauty as an expression of who you are is power. When we define our own standards of beauty, we take back that power. GLORY encourages children around the world to feel that power and harness it.
Visa hela texten

"But hardly any photo collection compares to the magic that is Glory. A must for our home. A must for Black children, for all children." --Ibram X. Kendi, New York Times bestseller and National Book Award-winning author of Stamped from the Beginning and How to Be An Antiracist Gorgeous photography, but so much more. A truly inspired and inspiring work that speaks eloquently to our inherent beauty and power. -- Brittney Cooper, author of Eloquent Rage: A Black Feminist Discovers her Superpower Seeing our beauty reflected in our children and having our children see their natural beauty be fully embraced is a gift to the race and a gift to the world. This transcendent work acknowledges the grace, and brilliance held in our black bodies. -- Michael Eric Dyson, New York Times bestseller These are not just photographs, this is artistically, politically, and socially important work. -- Patrisse Khan-Cullors New York Times bestseller They've made the capturing and the depiction of the beauty and the limitlessness of blackness their mission. Their edict. -- Damon Young, Founder of VerySmartBrothas.com

World-renowned child photographers, REGIS & KAHRAN BETHENCOURT are a husband-and-wife team and the imaginative forces behind CreativeSoul Photography. The pair gained global recognition with their AfroArt series. The collection, which showcases the beauty and versatility of afro hair, was conceived as a way to empower Black kids around the world. The images went viral after early supporters Will Smith, Jada Pinkett, Taraji P. Henson, Alicia Keys, and Common, among others, praised the series on social media. Their holistic approach to capturing one-of-a-kind moments has allowed their work to be featured on BBC News, CNN, CBS National News, Teen Vogue, Glamour Brazil, BET and more.