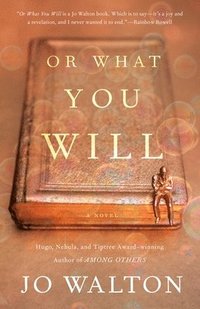 Or What You Will

av Jo Walton
Häftad Engelska, 2021-07-06
181
Köp
Spara som favorit
Finns även som
Visa alla 2 format & utgåvor
He has been too many things to count. He has been a dragon with a boy on his back. He has been a scholar, a warrior, a lover, and a thief. He has been dream and dreamer. He has been a god. But "he" is in fact nothing more than a spark of idea, a character in the mind of Sylvia Harrison, 73, award-winning author of thirty novels over forty years. He has played a part in most of those novels, and in the recesses of her mind, Sylvia has conversed with him for years. But Sylvia won't live forever, any more than any human does. And he's trapped inside her cave of bone, her hollow of skull. When she dies, so will he. Now Sylvia is starting a new novel, a fantasy for adult readers, set in Thalia, the Florence-resembling imaginary city that was the setting for a successful YA trilogy she published decades before. Of course he's got a part in it. But he also has a notion. He thinks he knows how he and Sylvia can step off the wheel of mortality altogether. All he has to do is convince her.
Visa hela texten

JO WALTON won the Hugo and Nebula Awards in 2012 for her novel Among Others. Before that, she won the John W. Campbell Award for Best New Writer, and her novel Tooth and Claw won the World Fantasy Award in 2004. The novels of her Small Change sequence-Farthing, Ha'penny, and Half a Crown-have won acclaim ranging from national newspapers to the Romantic Times Critics' Choice Award. A native of Wales, she lives in Montreal.