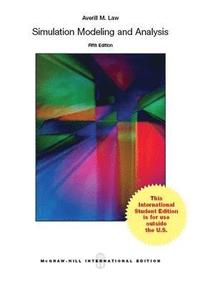 av Averill Law
Häftad Engelska, 2015-08-18
559
Köp
Spara som favorit
Skickas inom 7-10 vardagar.
Fri frakt inom Sverige för privatpersoner.
Finns även som
Visa alla 1 format & utgåvor
Since the publication of the first edition in 1982, the goal of Simulation Modeling and Analysis has always been to provide a comprehensive, state-of-the-art, and technically correct treatment of all important aspects of a simulation study. The book strives to make this material understandable by the use of intuition and numerous figures, examples, and problems. It is equally well suited for use in university courses, simulation practice, and self study. The book is widely regarded as the bible of simulation and now has more than 100,000 copies in print. The book can serve as the primary text for a variety of courses; for example:

A first course in simulation at the junior, senior, or beginning-graduate-student level in engineering, manufacturing, business, or computer science (Chaps. 1 through 4, and parts of Chaps. 5 through 9). At the end of such a course, the students will be prepared to carry out complete and effective simulation studies, and to take advanced simulation courses.

A second course in simulation for graduate students in any of the above disciplines (most of Chaps. 5 through 12). After completing this course, the student should be familiar with the more advanced methodological issues involved in a simulation study, and should be prepared to understand and conduct simulation research.

An introduction to simulation as part of a general course in operations research or management science (part of Chaps. 1, 3, 5, 6, and 9).
Visa hela texten

Averill M. Law is President of Averill M. Law & Associates, Inc. (Tucson, AZ), a company specializing in simulation training, consulting, and software. He was previously Professor of Decision Sciences at the University of Arizona and Associate Professor of Industrial Engineering at the University of Wisconsin-Madison. He has a Ph.D. and an M.S. in industrial engineering and operations research from the University of California at Berkeley, an M.A. in mathematics from California State University-Long Beach, and a B.S. in mathematics from Pennsylvania State University. Dr. Law has been a simulation consultant to organizations such as Accenture, Boeing, Booz Allen & Hamilton, ConocoPhillips, Defense Modeling and Simulation Office, Federal Express, Ford, Hewlett-Packard, Kimberly-Clark, M&M/Mars, Monsanto, Sandia National Labs, Swedish Defense Material Administration, U.S. Marine Corps, and Xerox. He has presented more than 550 simulation and statistics short courses in 20 countries, including onsite seminars for ALCOA, AT&T, Boeing, Caterpillar, Coca-Cola, CSX, GE, GM, IBM, Intel, Lockheed Martin, Los Alamos National Lab, Missile Defense Agency, Motorola, NASA, National Security Agency, Northrop Grumman, 3M, Time Warner, UPS, U.S. Air Force, U.S. Army, U.S. Navy, and Whirlpool. He is the developer of the ExpertFit distribution-fitting software, which automates the selection of simulation input probability distributions. ExpertFit is used by more than 3000 organizations worldwide. He also developed the videotapes Simulation of Manufacturing Systems and How to Conduct a Successful Simulation Study. Dr. Law is the author (or coauthor) of three books and numerous papers on simulation, operations research, statistics, manufacturing, and communications networks. His article "Statistical Analysis of Simulation Output Data" was the first invited feature paper on simulation to appear in a major research journal. His series of papers on the simulation of manufacturing systems won the 1988 Institute of Industrial Engineers' best publication award. He was awarded the 2009 INFORMS Simulation Societys Lifetime Professional Achievement Award for his simulation seminars and book. During his academic career, the Office of Naval Research supported his simulation research for 8 consecutive years. He wrote a regular column on simulation for Industrial Engineering during 1990 and 1991.

4) review of basic probability and statistics