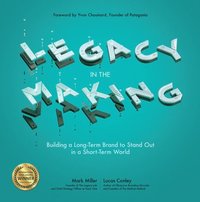 Legacy in the Making: Building a Long-Term Brand to Stand Out in a Short-Term World

av Mark Miller
Inbunden Engelska, 2018-05-31
232
Köp
Spara som favorit
Finns även som
Visa alla 1 format & utgåvor
a book for a different breed of business leader, one who looks beyond the moment to create a life of significance.
Most of us are familiar with the traditional way of looking at legacysomething preserved in the past. Traditional legacy is all around us, evidenced by the steady churn of autobiographies, bequests, commemorations, and dedications we are forever leaving in our collective cultural wake. This is not the legacy you will find in this book.
legacy in the making celebrates an active, dynamic form of modern legacy, seen through the eyes of a select group of extraordinary men and women who are pursuing their enduring ambitions in the age of now. More than caretakers of the past, these modern legacy builders are also the authors of a vital today and tomorrow. Rather than leaving their legacies behind them, they are looking ahead to harness their long-term ambitions and inspire others to help carry them forward. These are not static, traditional legacies. These are legacies in the making.
Visa hela texten

Mark Miller is the founder of The Legacy Lab, a research and consulting practice, and the chief strategy officer at Team One. Named a Trendsetter and an Agency Innovator by The Internationalist, Miller's work in helping global brands drive change has earned awards and recognitions from the Advertising Research Foundation, the American Association of Advertising Agencies, and Effie Worldwide. Lucas Conley is a writer with The Legacy Lab, the author of Obsessive Branding Disorder, and the coauthor of The Method Method. A former researcher for The Atlantic and staff writer for Fast Company, he has written for The Boston Globe, ESPN Magazine, SPIN, and The Wall Street Journal Magazine. Conley has appeared on The Colbert Report, ABC World News, CNN's BookTV, NPR, and at South by Southwest.

Introduction: The End of Legacy as We Know It

"Opportunities out of Obstacles"
Girls Who Code

"Your Culture is Your Product"
The Honest Company

"Deeds, Not Words"
The Bluebird Cafe

"Enroll Consumers as Coauthors"
The It Gets Better Project

Chapter Four: Invent Your Own Game

"Don't Be the Best--Be the Only One"
Grey Goose

"Define Your Category (Don't Let It Define You)"
The Belmont Stakes

"Don't Just Have a Plan, Stick with It"
The Toronto Maple Leafs

"Let the Past Inform the Present"
The Championships, Wimbledon

Conclusion: The Beginning of Your Legacy in the Making