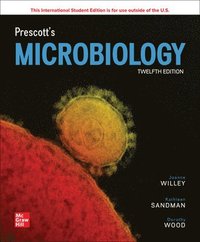 av Joanne Willey
Häftad Engelska, 2022-04-19
754
Köp
Spara som favorit
The author team of prescotts microbiology continues to provide a modern approach to microbiology using evolution as a framework. This new 12th edition integrates impactful new changes to include a fresh new design to engage students and important content updates including SARS-CoV-2 and COVID-19 which are prominently featured, taxonomic schemes that have been extensively revised, recent epidemiological data, and mRNA vaccines which just scrapes the surface of this new edition.
Visa hela texten

Joanne M. Willey has been a professor at Hofstra University on Long Island, New York, since 1993, where she is the Leo A. Guthart Professor of Biomedical Science and Chair of the Department of Science Education at the Donald and Barbara Zucker School of Medicine at Hofstra/Northwell.


Dr. Willey received her B.A. in Biology from the University of Pennsylvania, where her interest in microbiology began with work on cyanobacterial growth in eutrophic streams. She earned her Ph.D. in biological oceanography (specializing
in marine microbiology) from the Massachusetts Institute of TechnologyWoods Hole Oceanographic Institution Joint Program in 1987. She then went to Harvard University, where she spent her postdoctoral fellowship studying the filamentous soil bacterium Streptomyces coelicolor. Dr. Willey has coauthored a number of publications that focus on its complex developmental cycle. She is an active member of the American Society for Microbiology (ASM), and served on the editorial board of the journal Applied and Environmental Microbiology for nine years and as Chair of the Division of General Microbiology. Dr. Willey taught microbiology to biology majors for 20 years and now teaches microbiology and infectious disease to medical students. She has taught courses in cell biology, marine microbiology, and laboratory techniques in molecular genetics.


Dr. Willey lives on the north shore of Long Island and has two grown sons. She is an avid runner and enjoys skiing, hiking, sailing, and reading. She can be reached at joanne.m.willey@ hofstra.edu.


Kathleen M. Sandman received her B.A. in Biology from La Salle University and her Ph.D. in Cellular and Developmental Biology from Harvard University. She was inspired to a career in science by her older brothers experience as an organic chemist and by the developing technology in recombinant DNA in the 1970s. Her graduate work used a transposable element as a mutagen in Bacillus subtilis to study gene expression during endospore formation. She continued in the genetics of Gram-positive bacteria with a postdoctoral year studying Bacillus thuringiensis at the University of Cambridge in the United Kingdom. Another postdoctoral opportunity at The Ohio State University provided an introduction to the emerging field of archaeal molecular biology, where Dr. Sandman discovered archaeal histones and continued research in the structural biology of archaeal chromatin for about 20 years. She served the National Science Foundation as a research grant reviewer and panelist for the Life in Extreme Environments program, and has organized conference sessions on archaeal molecular biology and proteins from extremophiles. Dr. Sandman has taught microbiology to hundreds of students, at both the introductory level and in an advanced molecular microbiology laboratory.


Dr. Sandman has worked as a consultant in a variety of industries, including industrial microbiology, en...